To celebrate 40 years since the discovery of the ship's dog on the Mary Rose, Simon, author of "A Dog's Tale" and "Hatch's First Christmas" has penned a short story about what happened on 12th July 1981...

Hatch was cold, wet and miserable. He’d been like this for a while, nearly 436 years in fact. When the Mary Rose sank he’d been caught underneath a pile of wooden boxes, and despite trying his best to move them, he’d been stuck all this time, just him and a large flagon of ale that he couldn’t quite reach.

He saw a crab walking sideways across the seabed through a gap in the boxes, and tried to growl at it. Annoyingly, he wasn’t able to, as his lower jaw was inside the carpenter’s case, where one of this crab's ancestors had dragged it sometime in the 16th century.

Once his fur had gone, and the fish and crabs had lost interest in him, Hatch had been left alone, and if there's one thing dogs don't like, it's being ignored. He occasionally heard things, like ships moving overhead, getting louder as the years went on, and he was sure that someone had been stomping around a century or so ago, moving stuff around and setting off explosions, but other than the sound of shipping, everything had been quiet. At least, until recently.

Over the last few years he’d heard a lot of people moving around what was left of the ship, digging through mud and tidying up the mess made when the ship had tipped over. The captain had always been a stickler for tidiness, so Hatch thought he’d probably approve. 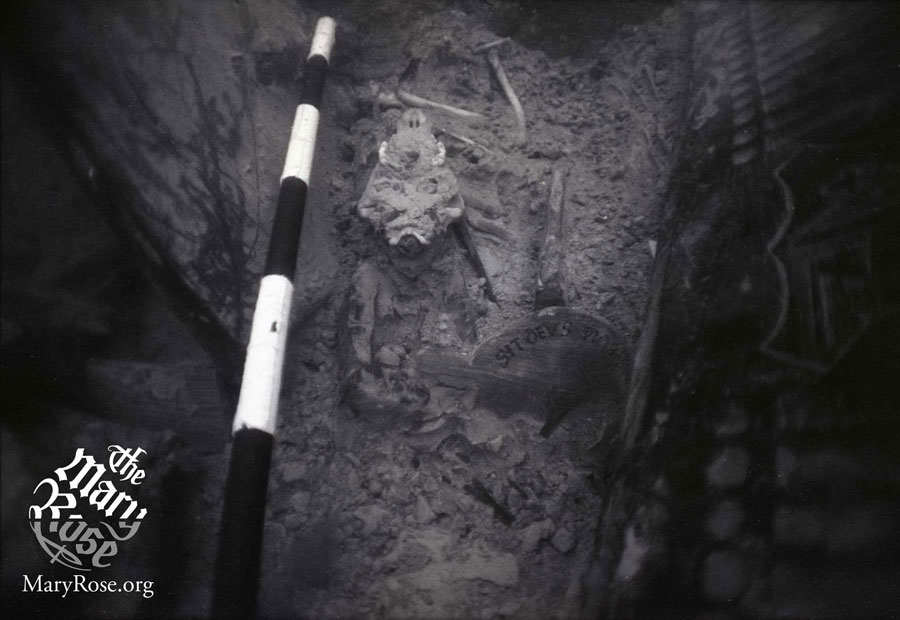 Suddenly Hatch felt the box above him move, and he tried to look up. He saw what looked like a monster, with a large yellow head with one large black eye with lights above it, but when it leaned in closer to look at him, he saw it was actually a helmet with a glass front, and there was a human inside who looked as surprised to see Hatch as he was to see them!

The human pulled out a long wooden rod, similar to the carpenter’s ruler, and laid it next to Hatch’s head, then pulled out a strange box with a tube on the front. They pointed it at Hatch, and it clicked, letting out a bright flash. They did it again, then once more, then pulled out a notebook and started making notes with a pencil. Hatch didn’t know what was going on, but he knew one thing; for the first time in 436 years, someone was paying him some attention.

The human in the helmet put away their notebook after a while, and moved away from where Hatch was lying. They paused for a moment, and gave Hatch a little wave goodbye, before swimming up and away from him. Hatch was sad to see them go, but he had a feeling that they would be back, and that an exciting new world was awaiting him.

If he knew where his tail was, he would have wagged it.

The ship's dog, nicknamed Hatch by our team, is one of the more popular exhibits at The Mary Rose, but who was he, and why was he on board?