Europe, 1512; The War of the League of Cambrai was waging. Although this was mostly an Italian war, all the European Countries were taking sides, and at this point England had allied itself with Spain, the Papal states and the Holy Roman Empire against an old foe: France.

At the start of the war, Henry VIII had appointed Sir Edward Howard as Admiral of the newly enlarged English Fleet, and allowed him to choose a flagship. Howard chose not to take the largest ship available, the Regent, but a smaller, newly completed ship. This ship was the Mary Rose.

Setting sail in April, Howard found that there was little to do with his new fleet. The French had yet to launch any warships, so they spent most of the summer harassing any foreign-looking ships that might appear, whether they be friend or foe, with the occasional escort duty and raids on towns along the French coast. 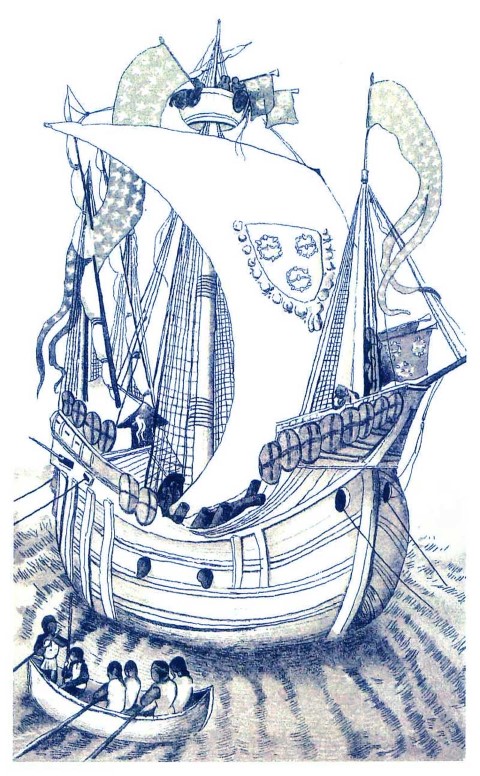 In early August 1512 news reached Howard, moored in Portsmouth, that the French had assembled a fleet at Brest. Howard set off shortly after, and engaged the enemy on 10th August in Berthaume Bay, near Brest. This caught the French fleet unprepared – indeed when the English arrived, they were partying, celebrating the feast of St Lawrence with the local gentry and their families.

Having ‘pooped’ the French party, the English Fleet engaged the French fleet. At the time the standard practise in sea battles was to avoid being closed in, keep your fleet together and hope the enemy run out of supplies before you do. Howard had a revolutionary new plan; shoot at the enemy a lot until they surrender.

The English and French fleets were similar in size; 25 ships  the English Fleet, including the large Regent and Sovereign, as well as the brand new Mary Rose, while the French fleet had 21 ships, their largest ships, Grand Louise and Cordelière being slightly smaller than their counterparts, but overall the French had more guns.

It was the Mary Rose that, according to records, drew first blood, when she shot off the main mast of the French flagship Grand Louise, commanded by Admiral René de Clermont. Although the Grand Louise was able to escape, with the loss of 300 men, this marked the first time in the history of Naval warfare that ships with lidded gunports had engaged one another. 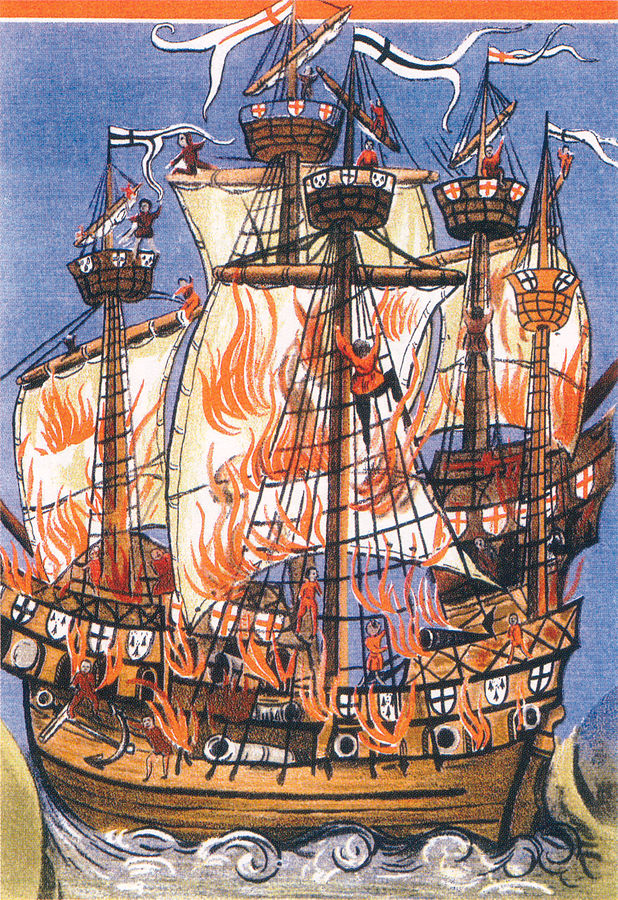 The Mary Rose doesn’t get mentioned again in records after this point, but the battle continued to go well for the English. It didn’t help that the majority of the French fleet had retreated as soon as the English arrived, preferring to take sanctuary in Brest harbour rather than engage the enemy. This isn’t to say that the French didn’t show any bravery, the Nef de Dieppe, captained by Rigault de Berquetot, fought for seven hours against seven English ships, and managed to survive the battle.

The real highlight of the battle was the fight between the Cordelière, commanded by Herve de Portzmoguer, and the Regent, commanded by Sir Thomas Knyvet. They fought as close quarters, blasting each other with everything they had, while 400 English troops boarded the Cordelière. The Cordelière was probably close to being captured when fire broke out on board. The fire spread, reached the powder magazines, and the resulting explosion blew both ships to smithereens. Of the 1,600 men on board both ships, only 140 survived, and the blast affected some of the nearby ships, forcing them to pension off large numbers of crew as unfit for service.  Among those killed was Sir John Carew, second in command of the Regent and relative of Sir George Carew, who would die when the Mary Rose sank during her last battle in 1545.

Despite this loss, Howard continued his assault on the French Fleet, and over the next few days he burnt twenty seven small ships, captured five more and seizing 300 Breton prisoners. On the way back to England he attacked several settlements along the French coast, capturing or burning even more ships. This went down very well with Henry VIII, who rewarded Howard with £66 13s 4d and the title “Admiral of England”