Being a warship, the Mary Rose carried a lot of objects that were, shall we say, unpleasant. As well as the various ship-to-ship weapons, there were pikes, daggers and swords for stabbing, bills and halberds for slashing, longbows and handguns for long distance killing, and rather nasty antipersonnel weapons such as the hailshot piece, a short barrelled gun that was used to blast iron dice at enemy boarders at close range.

But it wasn’t just the weapons of war that were nasty; some of the devices used to make people better were just as gruesome. Medicine wasn’t as brutal as it had been, the surgeons on ships were trained professionals who had studied and served apprenticeships, and some of the techniques used aren’t much different from those performed on the battlefield today, but you still didn’t want to become seriously ill in Tudor England. At least now they tend to anaesthetise first!

Which leads us nicely into our first object… 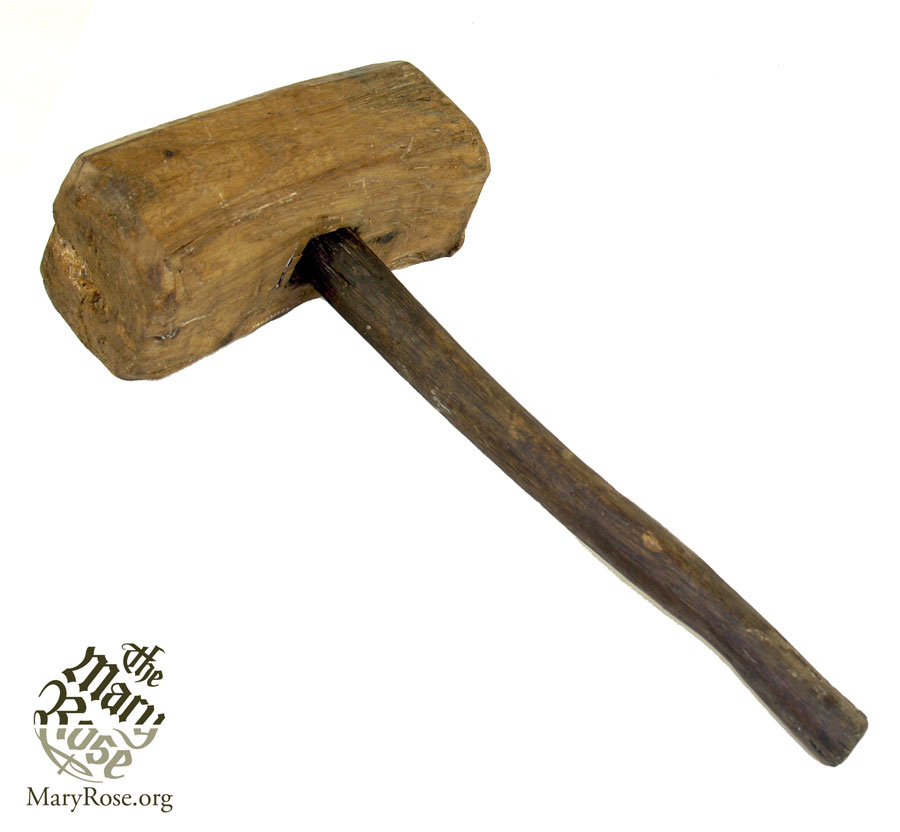 Whenever you the surgeon handling table, you are guaranteed to get someone come over, point at the mallet and say knowingly to their partner “that’s the anaesthetic!”(Occasionally they’ll repeat this even after you’ve corrected them!) However, even Tudor surgeons knew that a blow to the head is a terribly dangerous way to render someone unconscious; it damages the brain, and risks fracturing the skull. If you’re VERY lucky, and you recover within a couple of minutes, you’ll wake with a massive headache and the extra pain of an operation in progress (plus probably a few other complications, which we’ll get to later). Any longer, and you might not wake up at all.

Tudor amputations took place with the patient conscious. The original injury (which would have to be pretty bad; amputations were a last resort treatment) would either have put them into shock, numbing the senses, or make whatever the surgeon was doing seem relatively painless (and if they could afford it, they’d be given a soporific sponge, soaked in opiates that would reduce the pain). Either way, there would be plenty of people to hold them down while the surgeon got on with the job.

So, what was the mallet doing in the surgeon’s cabin, if not for bonking people on the head? With surgery, the name of the game was speed. The faster the operation was done, the quicker they could be patched up and the more likely they were to recover. With amputations, a flesh knife, razor sharp and curved, will slice through the flesh quickly, while a saw takes care of the bone. This is fine for an arm or leg, but if a finger or toe needs to come off, it’s far quicker to use a mallet and chisel, which would take off the damaged digit, quickly and (relatively) painlessly. 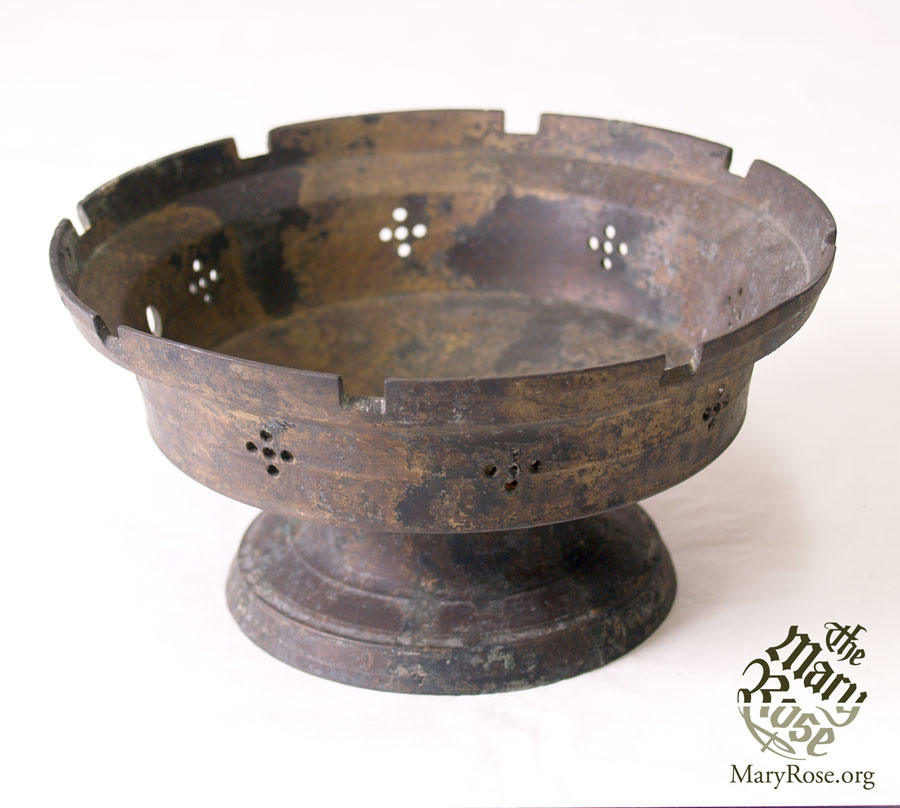 Closing wounds is very important. Firstly, it stops the patient bleeding to death, which at a time before blood transfusions were possible was vital (tourniquets would be used to prevent blood loss during the operation). Secondly, it stops the wound from getting infected, but this only works if you know what causes infections in the first place. Tudor medicine had yet to adopt germ theory, mainly because nobody knew what germs were. However, they understood the importance of cleanliness; surgeons tools were required to be kept clean (although not to the standards of modern medical equipment), while open wounds would be washed out with wine or vinegar.

One of the more hygienic ways of closing a wound was to suture it, stitching the flesh together over the wound. Sadly for English sailors, while the French were doing this, the English surgeons were still cauterising, using ‘irons’ heated in a chafing dish like this to essentially ‘cook’ the wound closed. Anyone who’s burnt themselves knows that burns can go septic pretty quickly, even more so in cramped, dirty environments like the Mary Rose. 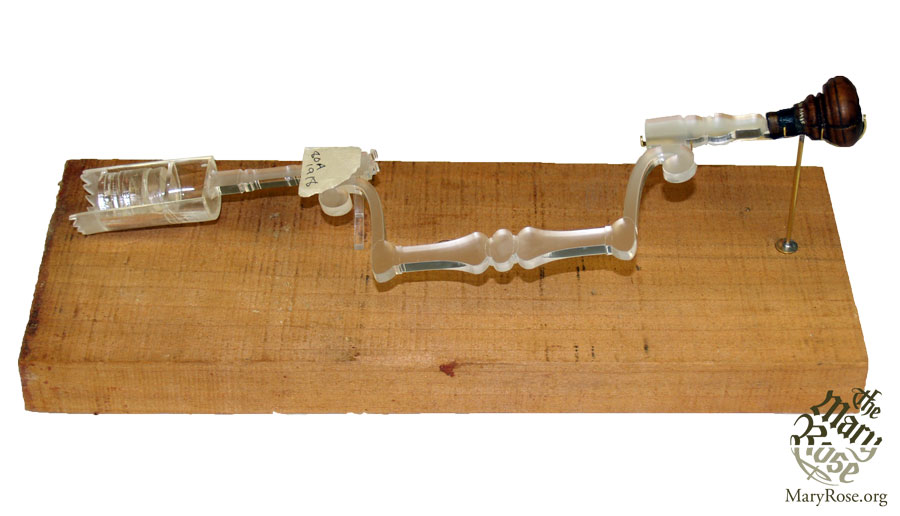 Let’s imagine that some idiot has hit you on the head with a mallet, because he ignored what I wrote further up the page. You’ve not been killed, your skull appears to be intact and, despite feeling fine for a while, you’re now dizzy and have a massive headache. While there are several possible causes for this, in this hypothetical case you’ve developed an epidural haematoma, where blood is filling your skull, putting pressure on the brain, often fatally.

If this happened on the Mary Rose, the surgeon would attempt to relieve the pressure by slicing through the scalp, exposing the skull, and using a trepanning drill to cut though the bone until it had cut a circular hole in the bone allowing the excess fluid to be drained off. To close up the wound, a silver coin would be placed over the hole (silver is an excellent antiseptic!), and the scalp would be stitched up and covered. The patient would then be left to recover.

While there is plenty of evidence that, even then, most of the patients did recover, we strongly recommend that if you have received a blow to the head, avoid the power tools and seek medical assistance. 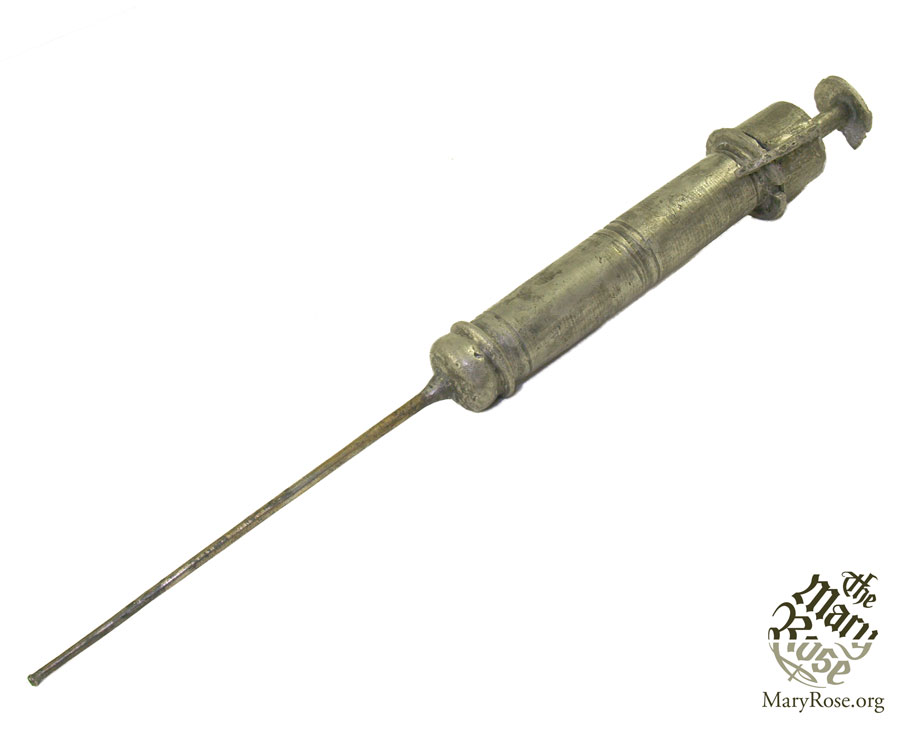 Sailors, it’s unfortunate to say, have a bit of a bad reputation when it comes to shore leave. When they go ashore after periods at sea, they’re accused of seeking out female company, often for a small fee. Sadly for many of these sailors they’d then go back to their ship with a souvenir of their night out.

Treatment for venereal diseases was not pleasant. Urethral syringes would be filled with liquids such as mercury, then inserted up the urethra so these caustic fluids would burn off any sores. This would be uncomfortable, painful, and require repeat treatments. This was also one of the few treatments not administered free to sailors by the surgeon; as it was hardly a work-related injury, it was seen as the patient’s responsibility to foot the bill.

I feel obliged to point out that, although traces of mercury were found in the chest of the ship’s surgeon, the bones of the crew of the Mary Rose show no traces of syphilis. Clearly our sailors were very well behaved! 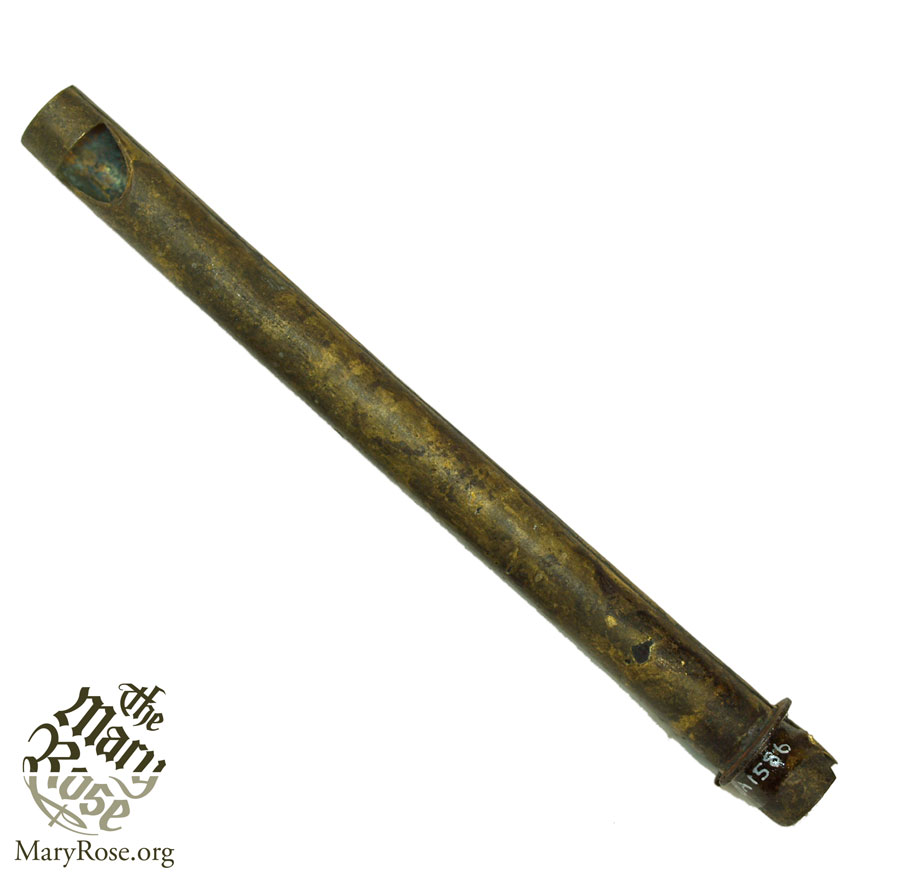 Imagine it’s 1980, and a chest has been recovered from a cabin on the Mary Rose. Inside this chest, as well as the usual pots of ointments and surgical tools, is what appears to be a whistle, with a flanged end that had a fragment of leather on it. You perform various tests on it, trying to get it to play a note, but it can only produce a note if you put it very carefully on the tip on your lips.

Then you examine the literature and discover that the leather was the remains of a fluid bladder, and what you’ve had in your mouth was an enema pipe, which had probably been used to administer medicines rectally to several people over the course of its active life. Lovely.

Come and see these and more objects on display at The Mary Rose in Portsmouth!

Plan your visitBuy tickets online and save!

This blog was originally posted on the Huffington Post blog in November 2014.