"The shop of the Mary Rose Museum today is well stocked with gifts to help remember a visit. However, rather than a cuddly toy Hatch or a Henry VIII rubber duck, the souvenirs of the 1840s used salvaged wood from the Mary Rose to produce intricate objects…"

The story of the first Mary Rose souvenirs begins with the work of John Deane, inventor of the diving helmet in partnership with his brother Charles in the 1820s. The diving helmet allowed its users greater movement and the ability to dive for far longer periods of time in comparison to its predecessors. The Deane brothers soon put their invention to the test in Portsmouth. 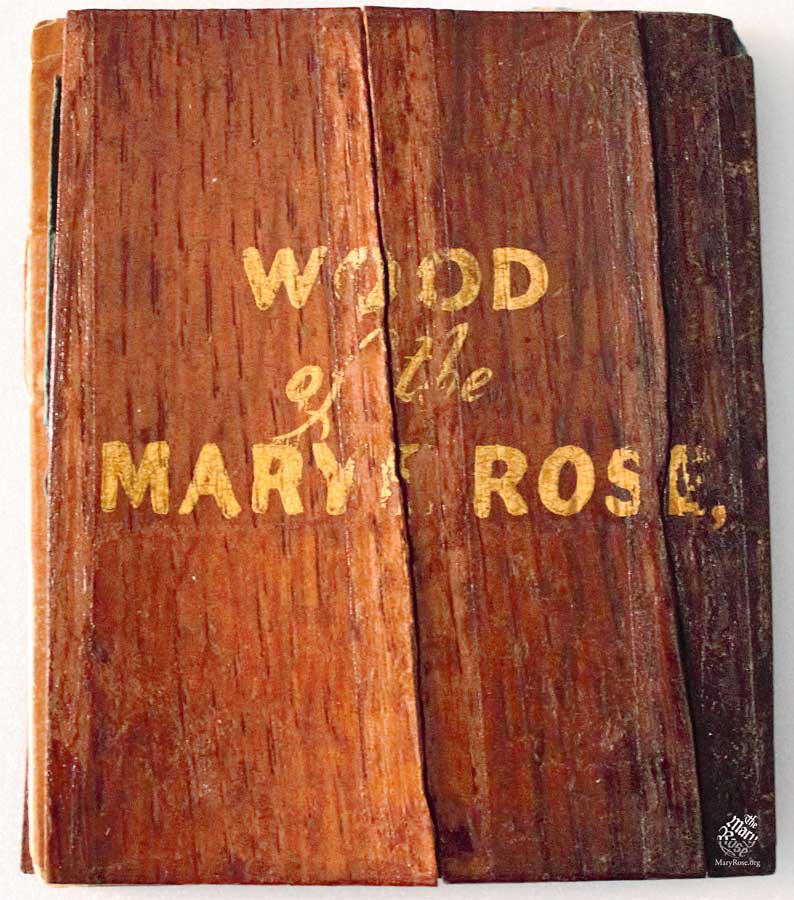 In June 1836, when John Deane was working on the wreck of the Royal George which had sunk in 1782, he was called to the aid of a group of fishermen who were ensnaring their nets on an unknown object beneath the water. Upon diving to the seabed, Deane found the nets had caught on some timbers protruding from the mud. Far more significantly, however, was the discovery of an 11 foot brass gun with a Latin inscription marking the object as being produced in 1532 and the possession of King Henry VIII. The unassuming timbers were in fact the remains of the Mary Rose. Along with the recovery of several more guns and pieces of iron shot, Deane was also successful in removing segments of oak timber and even a section of the mast. These were sold at an auction in Portsmouth on the 12th November 1840. From this point, the wood of the Mary Rose began to take on several new and exciting forms.

One of the most interesting objects produced from this wood and now in the Secondary Collection of the museum is a small book, measuring 9.6 x 8cm and comprising fifteen pages, titled ‘The Story of the Tall Ship Mary Rose’. The front and back pages of the book are produced from thin, delicate sheets of timber with gold lettering describing them as being created from ‘Wood of the Marye Rose’. Edited by Henry Slight and published in Portsmouth in 1841, the text is largely drawn from eye-witness accounts of the sinking by Sir Peter Carew, brother to the captain of the Mary Rose Sir George Carew. At the end of the book, letters from the State Papers describe the ultimately failed attempts in 1545 to raise the ship. While the text aimed to create an authentic narrative of the Mary Rose for a well-educated and upper class audience, the wood binding brought the words to life in a playful, if not slightly macabre manner. Multiple similar versions of these books were produced, and a different edition first published by Samuel Horsey in 1842 was even owned by Queen Victoria!

Alongside the books, other items formed from the wood of the ship included finely carved snuff boxes with gilded lettering describing them as being ‘Part of the Marye Rose’. From the mast and large sections of timber, objects including walking canes were made! For their buyers, these items probably served as conversation starters or symbols of class, and were likely valued for both their rarity and their physical connection to a previously lost part of England’s naval history.

Today, our focus is on preserving the Mary Rose so as many people as possible can see her, and these types of objects are no longer made. Although our current souvenirs might not be quite so elaborate, they are no less fun!