During the last semester of my Master’s studies in Objects Conservation at the University of Oslo, I chose to travel abroad to work as an intern at a conservation institution. Since my main interest is organic and inorganic materials found in marine archaeological environments, the Mary Rose Trust was my first choice. I arrived in Portsmouth in early February to start my internship at the Mary Rose Trust, and have since been working on a variety of projects related to conservation science. One day, my supervisor (Eleanor Schofield - Head of Conservation & Collections Care at the Mary Rose Trust), came into the laboratory where I work and asked if I was willing to work on a wooden object from another museum. I was, of course, up for the challenge!

In mid-February, the object arrived in the laboratory after being collected from its owners, the Diving Museum in Gosport. The Bullion Box, hereby referred to as a chest, is a composite object, which means that it has elements from several material groups: in this case metals, glass, paper and fibres, in addition to the wooden boards. The chest was found onboard of the ship Alphonso XII which sank off the coast of Gran Canaria in 1885. The ship was carrying a total of ten similar chests that contained gold coins and were all found three decks down by diver Alexander Lambert. 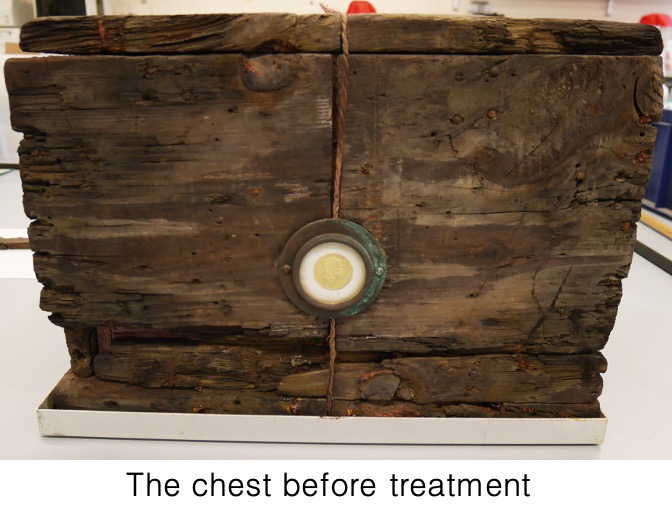 After the chest arrived at the MR laboratory, I performed a thorough condition assessment to identify problematic areas on the chest. From this I could provide the conservation team at the Mary Rose Trust with some well-thought-out treatment suggestions. This is something a conservator should always do before starting a conservation treatment, both to assure that the most problematic issues and damaged areas of an object are not overlooked and to better be able to decide on appropriate treatment methods. As the chest had been left to dry without any treatment after excavation, the wooden boards were left both brittle and dry. In addition to problems related to the dry wood, a few other problematic areas were also identified, such as corroding iron nails and active bronze corrosion on the chest’s frontal piece which consists of metal, glass and paper. After all treatment suggestions were approved by the conservation team, I began to conserve the chest.

My first treatment task was to look further into the active corrosion product surrounding half of the metallic frontal piece. At first, I was slightly worried it might have been bronze disease, which is a very damaging corrosion process that would potentially need chemical removal. I started out using a scalpel carefully to figure out if it was mechanically removable. Surprisingly enough, it was possible to remove almost all of it with a scalpel, which indicated it was not bronze disease, which was a relief. To remove any remaining corrosion particles, I cleaned the metal carefully with cotton sticks wet by denatured alcohol (IMS).

I also chose to clean the glass with cotton sticks and IMS to remove both dirt and corrosion powder. I knew that the metal piece would need a coating to prevent further corrosion from taking place, but I chose to leave this step of the treatment until after the surface cleaning of the entire chest.

The next treatment step was to remove as many iron nails as possible without damaging the surrounding wood or dismantling the entire chest. After a careful examination of the chest’s inside, and therefore ruling out any problematic areas, I decided to keep it closed with its original fibrous rope holding it together in one piece. This decision was made to save the chest from any unnecessary stress during treatment, especially due to the fragility of the wood. Therefore, the iron nail removal was only done from the outside. Most iron nails were impossible to remove entirely, but I was able to remove the most degraded and weeping parts carefully with tweezers and pliers. Only one of the iron nails was removed in a complete shape. 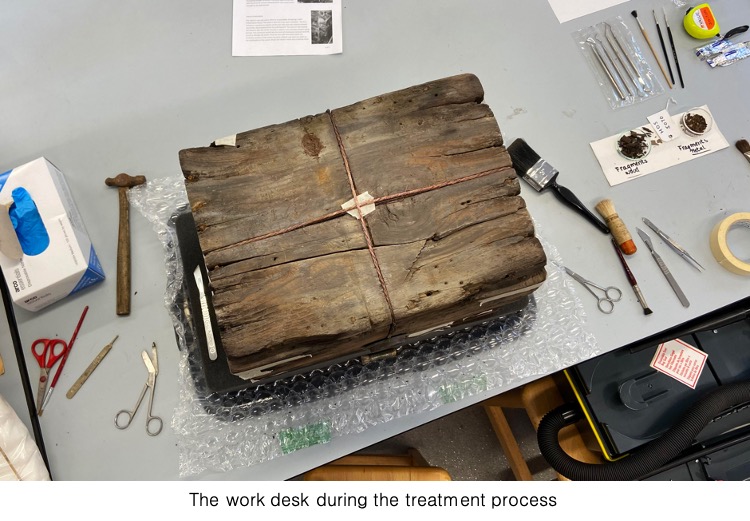 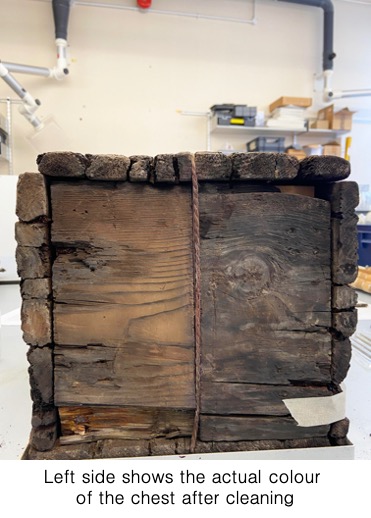 After removing as many corroded iron nails as possible, I moved on to cleaning the wooden surfaces of the chest. I used different brushes and a museum vacuum with a soft tip to remove surface deposits from dust and the burial environment. After surface cleaning the entire chest, I had to remove some dust that had gathered on and around the frontal piece, again using cotton sticks and IMS. As the surface cleaning was completed at this point, I figured it was time to add the protective coating for the metal surrounding the frontal piece. I used a smooth, flat brush with Paraloid B-48 (15% in acetone) to coat the bronze, which will hopefully prevent any further corrosion.

As the wooden chest had been left to dry without any treatment, I had to consolidate loose fragments and the more unsteady areas of the wooden panels. Smaller fragments and loose areas were consolidated by using ButvarÂ® B-98 (5% in IMS). I found that this low concentration of ButvarÂ® B-98 was not strong enough to adhere bigger wooden fragments back to the chest. Sadly, this work came to an end at this point, as the worldwide pandemic escalated, and the Mary Rose Trust closed. When we return, I will complete the finishing touches, such as finding another way to adhere bigger fragments back to chest and adding something that will hold the chest together more steadily. I look forward to completing this and returning the newly conserved chest back to the Diving Museum. 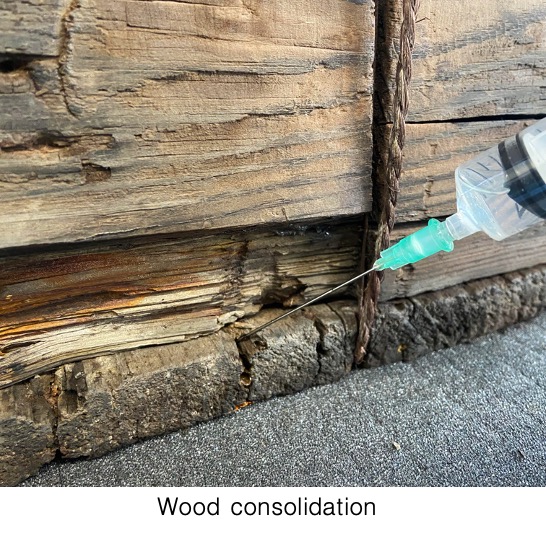 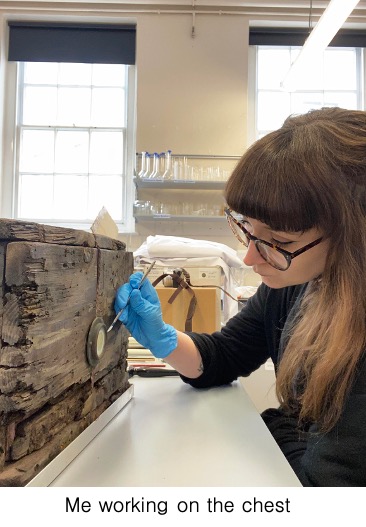