“I’m the pilot on the Mary Rose and I have a very important job.

I have to know where the ship is and how to plot a course to get her to port. If I make a mistake, the ship might run aground.”

The pilot's cabin was on the main deck of the ship, near the bow.  The cabin was tiny, with only just enough room for a small bed and a chest of equipment, including his spare compass.

The Pilot didn’t work where he slept, he needed to be able to see the sun, the sea and the stars. he did his navigation from the sterncastle.

This is a one of the three compasses found on the Mary Rose. The compass had an iron needle in it which was magnetised. The pilot made the needle magnetic by stroking it with a piece of magnetic rock called a lodestone. The needle was balanced on a spike, and it would point to the Magnetic North Pole. 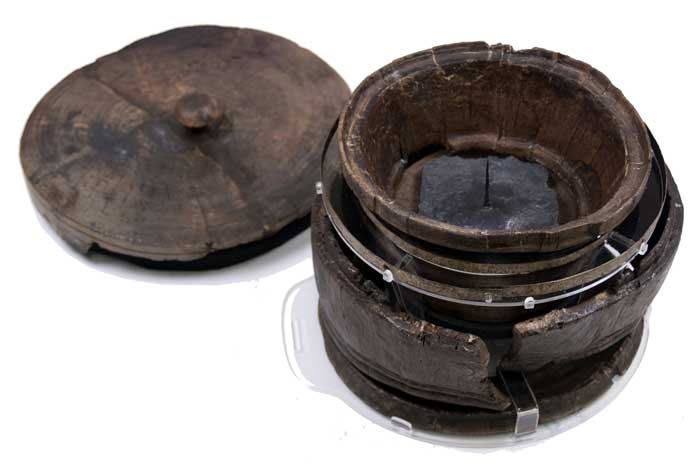 The card inside the compass would have looked something like this. North is at the top of the card; the other directions weren’t shown on many compass cards.

When it was being used, the compass would be held in a wooden stand called a binnacle. No iron was used in the construction of either the compass or the binnacle, because iron affects the accuracy of compasses. 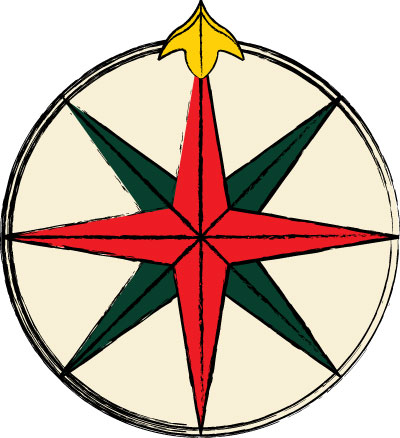 Four pairs of dividers were found on the Mary Rose. They are made of brass and would have been used to plot out courses and distances on charts. We didn’t find any maps or charts on the Mary Rose, they most likely rotted away. 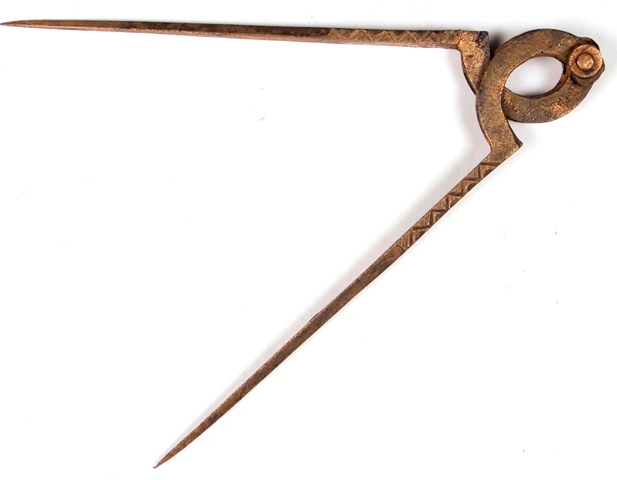 The pilot on the Mary Rose might have used a sort of chart called a “Portulan”. This showed the outline of the coast and the names of ports along the coast. Compass roses were drawn on the chart to help the pilot fix his course.

The charts were made of goat or sheepskin as this was more resistant in wet weather than paper.

The pilot would have also had a book of written sailing instructions called a “Rutter”. This would have included lists of landmarks, distances, tide tables and notes about rocks and places to anchor.

Several book covers were found on the Mary Rose, but since the paper didn’t survive, we don’t know if one of them was a Rutter.

The log reel was used to measure the speed of the ship. A piece of wood called a “chip” was thrown overboard. A line was fixed to the chip and a long length of knotted rope was tied to the line.

The knots were tied at 7 fathom (42 feet) intervals and they were timed as they passed over the stern of the ship using a 30 second sandglass.

At the time of the Mary Rose a nautical mile was reckoned to be about 5,000 feet. (Today it is set at 6,080 feet). Because speed was measured with the log reel, nautical miles travelled per hour are called knots. We say a ship travels at 9 knots, never 9 knots per hour! 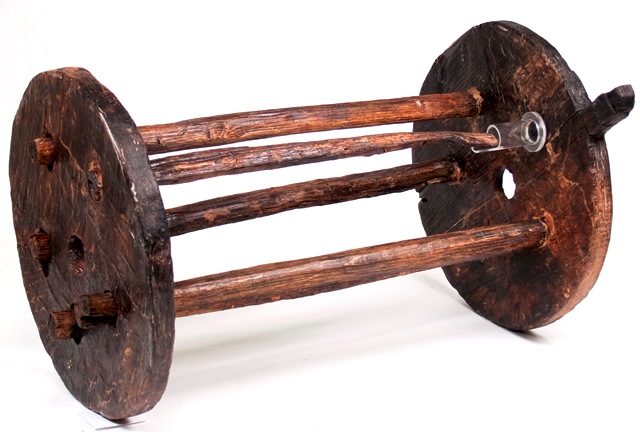 In Tudor times clocks would not work on a moving ship. They used other methods for telling the time.

Time was measured on the Mary Rose using sandglasses, where sand trickled from the top to the bottom over a set length of time.

There would be a 30 second glass used for timing the speed of the ship using the log reel, and a half hour glass for measuring the length of the watch. 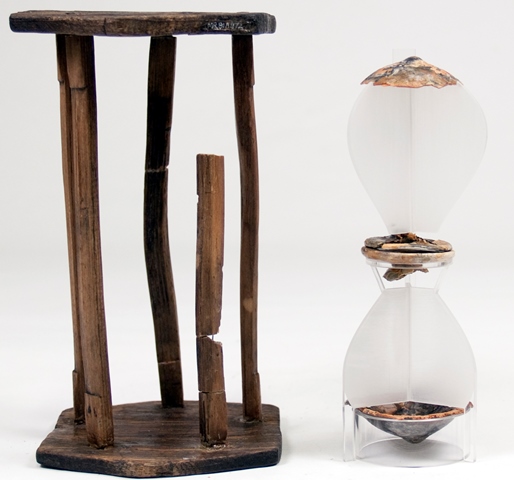 Another way of telling the time was by using a sundial.  The time could be found by pointing it towards north using the built-in compass, and looking where a shadow was cast on the dial, which was marked with the hours of the day. This could only work when the sun was out!

Nine sundials were found on the Mary Rose. They were probably made in Nuremburg, in what is now Germany.

Although sundials may have been of some use for telling the time, they were more a symbol that the owner had the latest gadget! 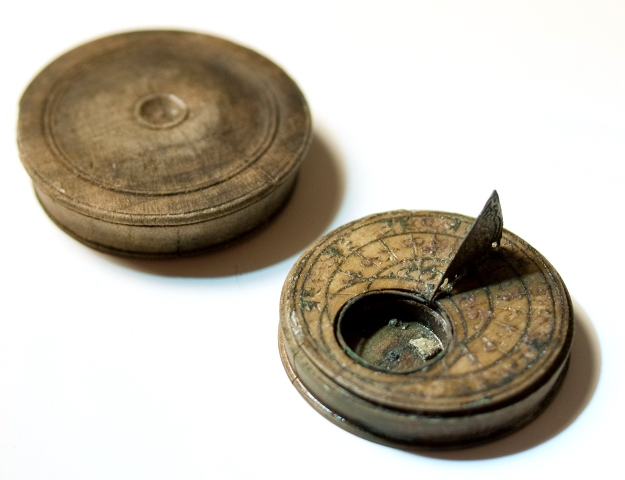 The Bell, and Keeping Watch

It’s made of bronze and has written on it “IC BEN GHEGOTEN IAER MCCCCCX.” This means “I have been cast in the year 1510” in Flemish, a language spoken in Holland and parts of Belgium. Since the Mary Rose was being built in 1510, it meant that the bell was as old as the ship!

The bell was rung once for every half hour that passed, and each crewmember worked a four-hour shift, or ‘watch’, so there were eight bells in a watch.

When the crew first came on-board the Mary Rose, they were split into two watches. These were called the port and starboard watches after the two sides of the ship. Each man had a partner on an opposite watch with whom he shared his sleeping space – and probably his lice and fleas!

This is a 3D model of the Mary Rose's Bell

The sounding lead, made up of a lead weight and a line, was used to find how deep the water was. If the water was too shallow, the ship could run aground.

The bottom was hollowed out and filled with sticky tallow (animal fat). When the lead hit the seabed, bits of stone, mud or small shells would stick to the tallow. This would help the pilot tell where he was, because the seabed varies from place to place.

The sailor whose job it was to use the lead stood on the bow of the ship and swung the lead out in front of it. When the line was vertical he would measure the depth of water. The line had bits of cloth, rope and leather fixed to it to mark different depths. This let the sailor tell the depth by sight or at night by touch. The depth was measured in fathoms (6 feet or just under 2 metres). 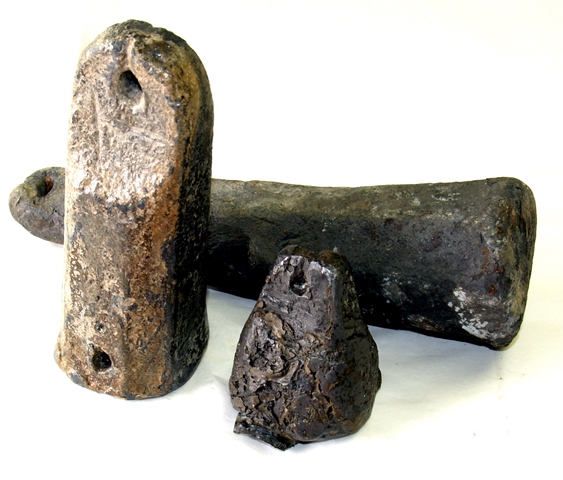