“Some people might think that it’s an easy life being a cook. It’s not! I have to feed 415 men every day.

I work in a hot, smelly galley, deep in the hold of the ship. I’m going to show you where I work, and tell you about what the crew eat and drink.We’ll also look at how the crew ate and how the food was stored on the ship.”

We believe that the cook’s name was Ny Coep. By looking at his bones, we think that he had once been a member of a gun crew, doing lots of heavy lifting, until he damaged his knees.

Discover more men of the Mary Rose!
The Galley (the ship’s kitchen)

There were two large, brick built ovens in the galley, each with a huge brass cauldron on the top. Meat and fish were boiled in these. The cauldrons had a lead lip around them. We now know that lead is actually poisonous, so that wasn’t a good idea!

This is what we think the galley looked like when it was in use.

The walls and floors of the ovens are made of brick. They sit on the gravel ballast that was put in the hold of the ship to help keep her stable. The sides and back of the ovens were supported by strong wooden walls.

The galley didn’t have a chimney. Instead, the smoke was trapped in a box-like area above the ovens, where it could be used to flavour fish and meat.

The ladle was used to scoop the food out of the cauldrons.

It would have had a really long handle, allowing the cook to get to the bottom of the cauldron. (Ours has broken off!)

This little cooking pot was probably used for cooking meals for the senior officers.

It had three legs so it could be heated by standing it in the glowing embers of the fire. 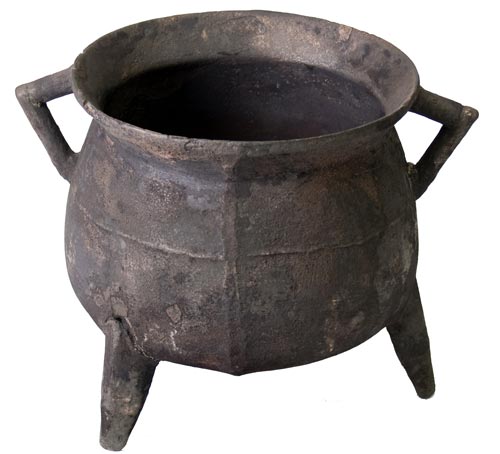 The mortar is a heavy bronze bowl used with a metal stick called a pestle for grinding herbs and spices to add flavour to the officer’s food. 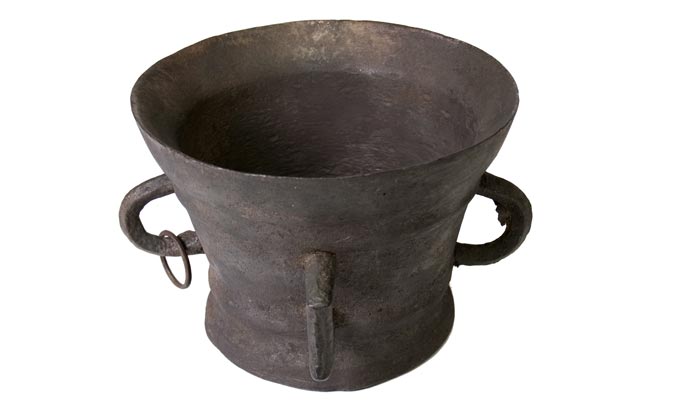 The officers and men on the Mary Rose came from very different backgrounds. Most of the officers came from rich families, and they were used to eating from gold and silver plates.

This is one of the officer’s plates found on the Mary Rose.

They didn’t usually take their best plates on-board ship. They took pewter plates and drank their wine and beer from pewter tankards.

Pewter is a mixture of tin and lead, and looks like silver when it is polished. 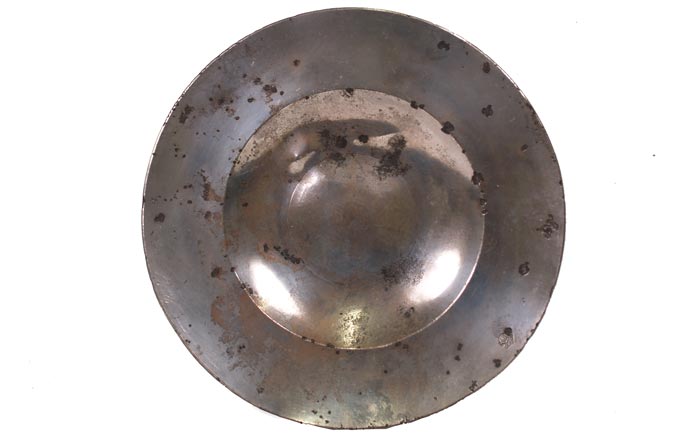 Some of the pewter plates have their owners’ mark on them. This picture shows the coat of arms of Viscount Lisle, the Admiral of the Fleet.

Other plates had the mark of Sir George Carew, the Vice-Admiral, who was in charge of the Mary Rose when she sank.

This is one of the officers’ tankards.

Its lid stops the drink spilling in rough seas. If you come to the museum, you will see other pewter tankards, including some big ones that would have been used as jugs.

This tankard has “1545” scratched on its base. That is the year the Mary Rose sank. 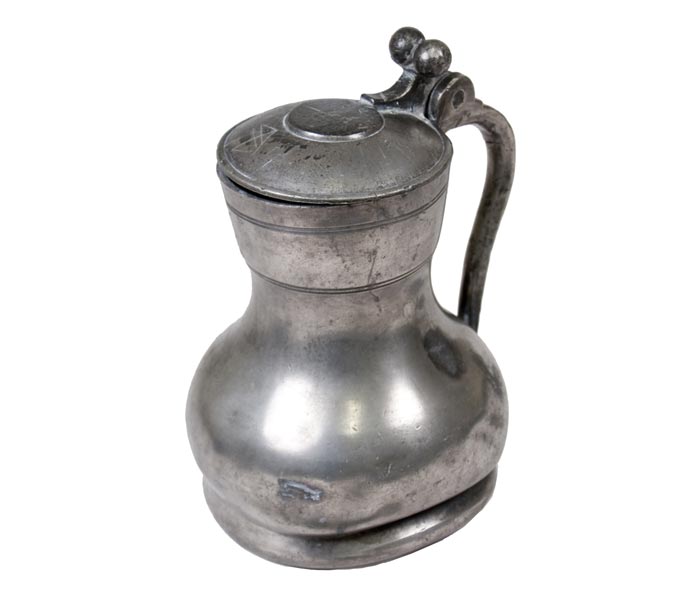 This pewter flask was made to be carried around.

It has a screw top lid, and loops on the side to hold a strap. 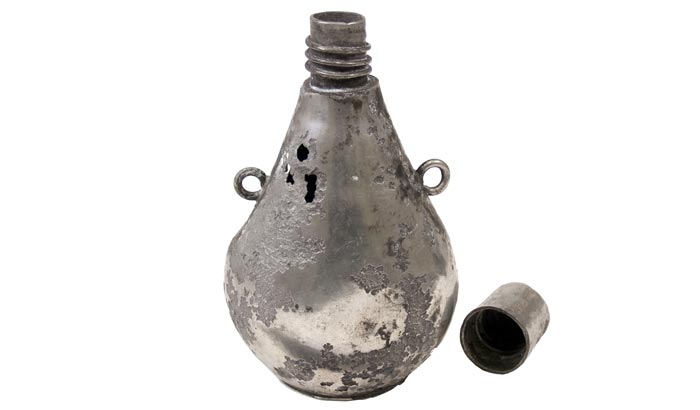 In Henry VIII’s time, people in England didn’t eat with forks; they used knives, spoons, and even their fingers!

This is one of the pewter spoons found on the Mary Rose.

The crew of the Mary Rose ate from wooden plates, dishes and bowls. Like the officers, they used knives, spoons and their fingers to eat.

87 wooden bowls, 58 wooden dishes and 144 wooden plates were recovered, many from within barrels near the galley.

This one features personal marks made by the man who owned it.

The men drank from wooden tankards.

These are made like little barrels and are lined with pitch to keep them waterproof.

The tankards are wider at the bottom than at the top and have a lid. 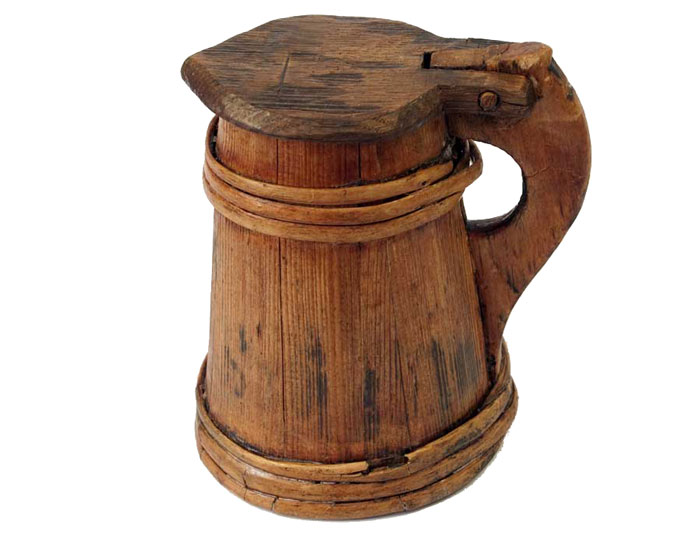 Some of the crew owned leather drinking flasks, which they could carry around with them.

They had loops at the top for a strap and a stopper, made of wood and wrapped in leather to keep it water-tight.

Like the wooden tankards, they were lined with pitch to make them waterproof. 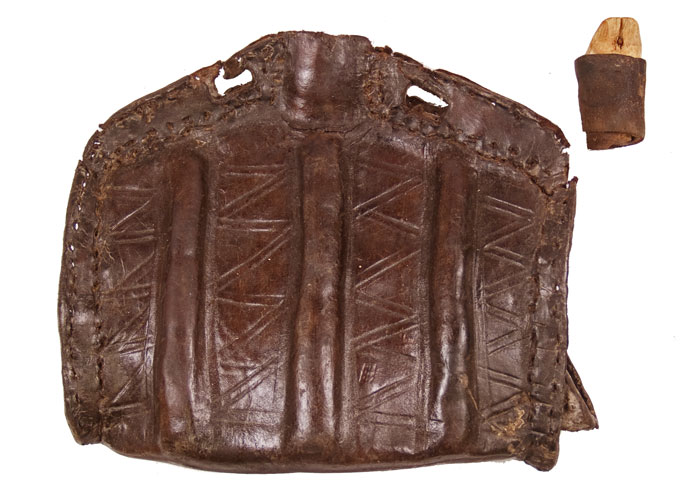 We only found a few wooden spoons on the Mary Rose.

We think most of the men would have had spoons made from cow horn, which didn’t survive well.

Of course, the wooden spoons might have just floated away!

Food on the Mary Rose

Tudor Sailors lived mostly on salted beef, salted fish and ship’s biscuits. They had meat  four days a week and fish on the other three. We know the crew ate other foods like cheese and butter, but we didn’t find any on the Mary Rose.

The English were famous for their love of beef.

It was one of the main parts of the mens’ diet on the Mary Rose. Each man got about a kilo of meat every day.

As there were no fridges or freezers in Tudor times, meat was salted and packed in barrels so it would last a long time.

Barrels full of cattle bones were found on the orlop deck of the Mary Rose. 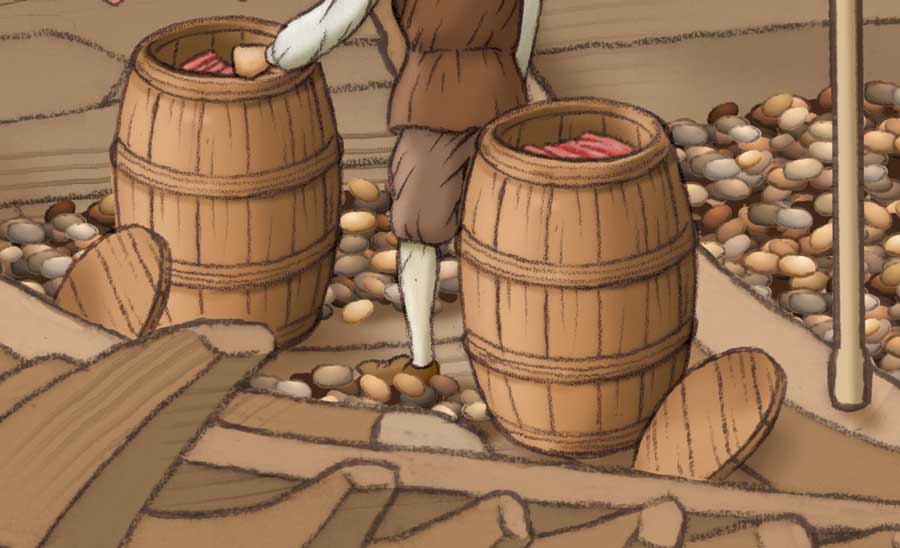 Lots of pig bones were found on the orlop deck.

These bones weren’t found in barrels. They might have been fresh supplies or salted and hung up.

From the way it was stored, it’s possible that pork was going to be their main meal the next day. 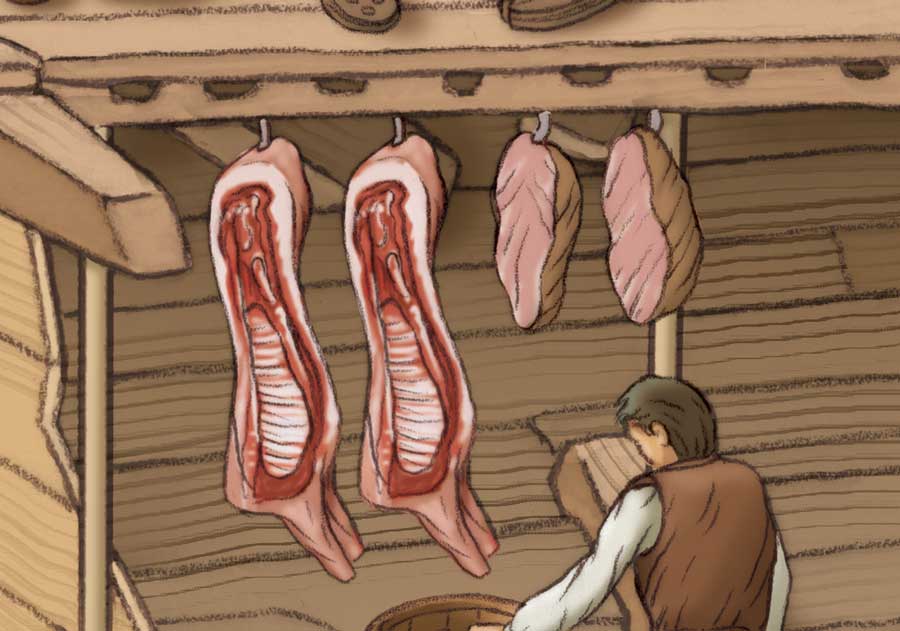 Ordinary bread wouldn’t keep very well on board ship, so the navy had special bread made.

Ship’s biscuits are made of flour, water and salt. They were baked twice to make them as dry and hard as possible.

The crew of the Mary Rose would each be given eight biscuits a day.

They probably put them in their plates or bowls and put the meat and fish on top. The gravy would soften the biscuits, otherwise they’d be too hard to eat! 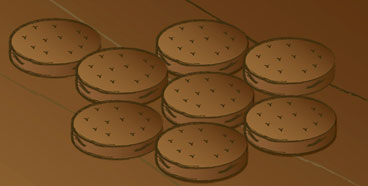 Recent study of the fish bones shows that they were caught near Newfoundland, off the coast of Canada!

Although they would have been salted, they still attracted a lot of flies, and we even found a few of their larvae among the fish bones!

At least one man on the Mary Rose caught his own fresh fish. We found fishing gear in one of the wooden chests. There were wooden handlines and floats made from cork and willow, and a lead weight. There was also a disgorger (a tool for getting the hook out of the fish) in the same chest. 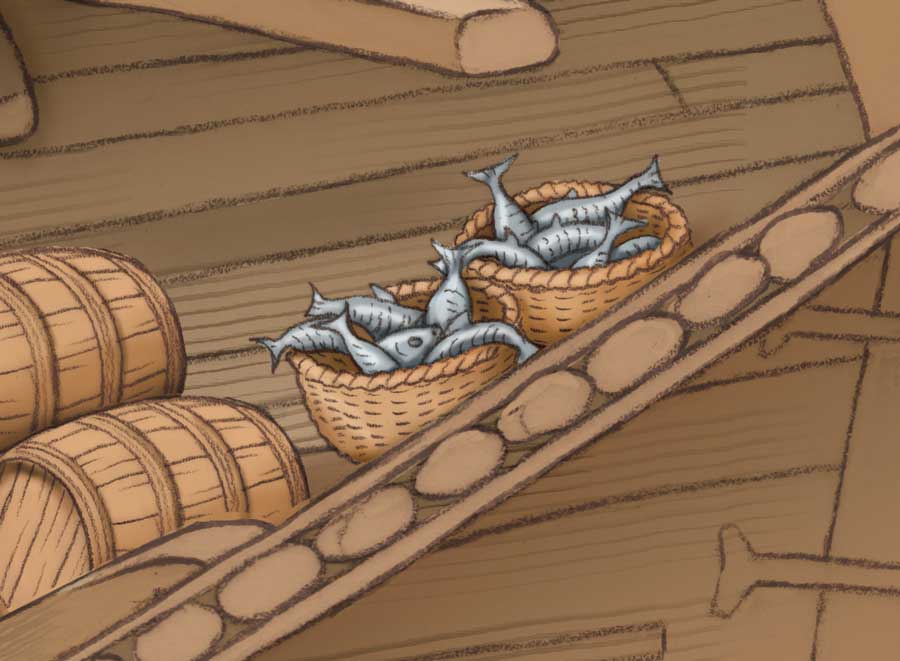 Most of the crew of the Mary Rose would not have eaten fresh fruit and vegetables on board ship.

Just about the only fruit we found on the wreck was a basket full of hundreds of plum stones. We don’t know for certain whether these were from fresh plums or dried ones (prunes). These plums may well have belonged to one of the officers.

We also found apple pips and cherry stones, and crew’s rations included dried peas. They weren’t getting their ‘five-a-day’, but their diet was probably better than you might think! 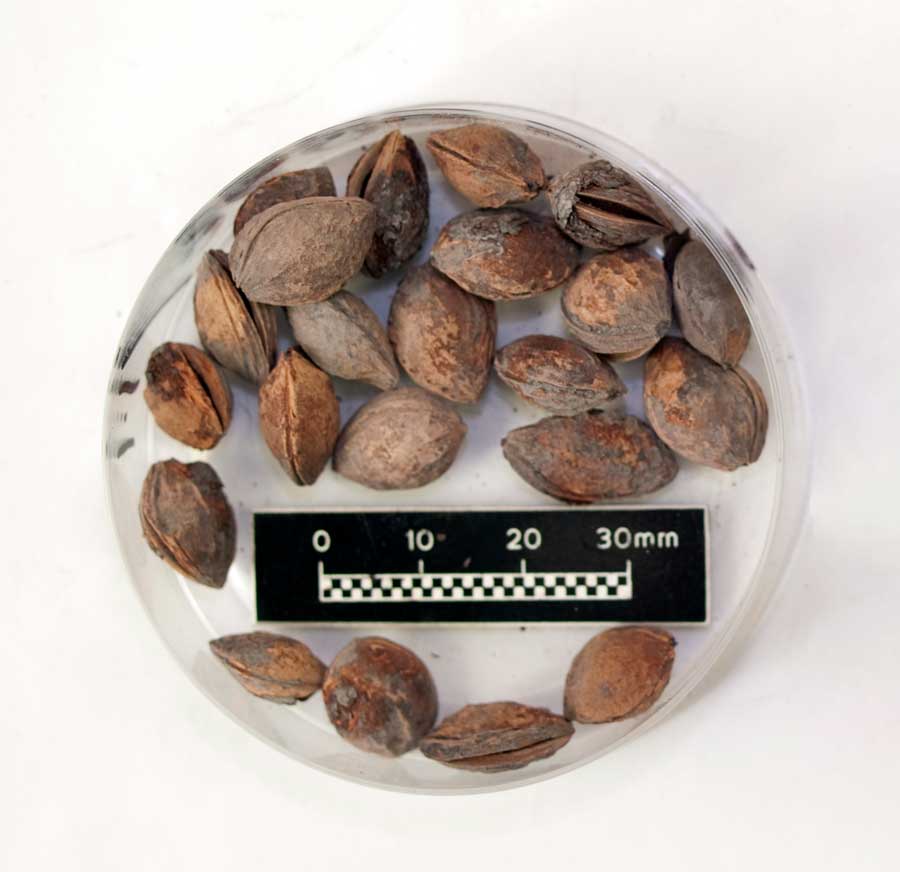 Drink on the Mary Rose

In Tudor times water often wasn’t safe to drink. Milk was usually made into butter or cheese, and fruit juice wouldn’t keep for long. The English hadn’t discovered tea and coffee yet, so everybody drank beer. Even children drank beer, though it wasn’t as strong as beer today!

The sailors on the Mary Rose had a ration of a gallon of beer a day, that’s nearly four litres!

Beer was a very important part of the sailors’ diet. It contains lots of calories and is a good source of vitamin B.

The navy needed to buy huge amounts of beer to keep the ships’ crews happy and healthy; it was much safer to drink than water because the brewing process killed most of the germs (not that they knew why at the time!)

A lot of the navy’s beer was made in royal breweries. In 1525 there were at least five royal breweries in Portsmouth, called the Rose, Lyon, Dragon, Whiteharte and the Ankre (Anchor).

Wine was only drunk by the richer people in Henry VIII’s time.

The officers on the Mary Rose drank wine as well as beer.

Most wine came from France, but strong, sweet wine from the Mediterranean was very popular. 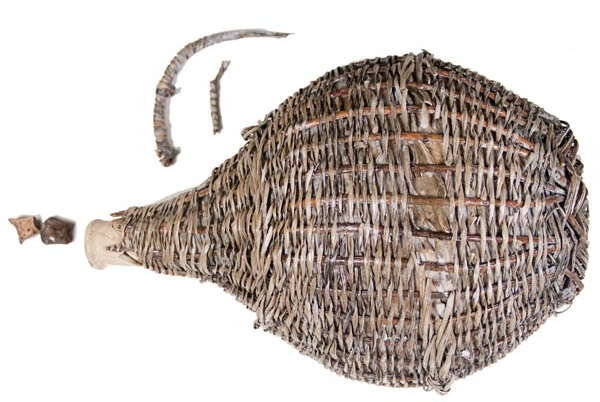