You may have seen that we’ve revised our reconstruction of the Archer Royal, previously shown as a blond, blue-eyed European, to a gentleman of African descent. This hasn’t been done for political or social reasons, but as the result of detailed scientific study.

No ship’s manifest for the Mary Rose in 1545 exists, so we’re unable to look up a list of the archers and see what their names, ages and nationalities were. This meant we had to use scientific methods to identify where our archer came from.

The food you eat and the water you drink contain clues about your life. Various foods contain different ratios of stable isotopes, the atoms of the elements of carbon and nitrogen, which end up stored within our living tissues.

Water contains varying amounts of the isotopes of oxygen and the metal strontium depending on the amount of rainfall and the rock formations in any particular area.  Sulphur provides information about distance from the coast. These are stored as chemical signatures within our bones and teeth.

Collagen is the most abundant protein in mammals, like humans. It gives mechanical stability, strength and toughness to a range of tissues like tendons, ligaments, skin, cornea, bone and dentine within the teeth.

Once teeth have formed in childhood, their chemical signatures do not alter.  To explore the Archer Royal's roots, we took collagen from the root of one of his teeth, as this would have the least chance of contamination

His nitrogen, carbon and sulphur values suggest a terrestrial diet, so he was eating little in the way of seafood.  His high nitrogen values suggests he had a protein rich diet, possibly from pigs or freshwater fish. His sulphur value is close to zero, so he did not live near the coast; unusual for someone who works on a ship!

The main indicators of him not being from Europe are his strontium values, which suggest he lived in a limestone area, which do exist across the continent, but are also present in parts of North Africa. The final clincher is his oxygen isotope value, which is much higher than the British norm, suggesting that he was certainly not born in Britain.

Based on this information, we believe that he came from inland North Africa, over 50km from the coast. Further DNA analysis will be needed to confirm this,

What we do know, based on his skeletal remains, is that he was in his early 20s and, at 1.79m tall (5ft 10in), making him slightly taller than most of the crew, who averaged around 1.7m (5ft 7in).  He was well built, with particularly strong legs.  The centre of his spine is twisted, a common feature in Mary Rose crew members found with archery equipment, and one of his right finger bones has grooves on the inside; possibly the result of repeatedly drawing a longbow string.

He was found wearing a jerkin, shoes and woollen socks. He also carried a sword in a decorated scabbard, hanging from which was a wooden pomander, a scented ball used to mask bad odours.

Intriguingly, he was also wearing a leather wristguard decorated with the Royal Arms of England and Katherine of Aragon’s badges - the triple turret of Castile and the pomegranate symbol of Granada. It’s a bit of a mystery why such a wristguard, of which two were found on the Mary Rose, with the badge of Katherine of Aragon, still be worn so many years after the King had divorced his first wife, breaking with the Catholic Church as a result? The archer would have been a child during the King’s marriage to Katherine of Aragon, so did he inherit it, or was he simply issued with an old wristguard? The presence of more than one of these wristguards suggests that a number of the Royal Bodyguards may have been on board. 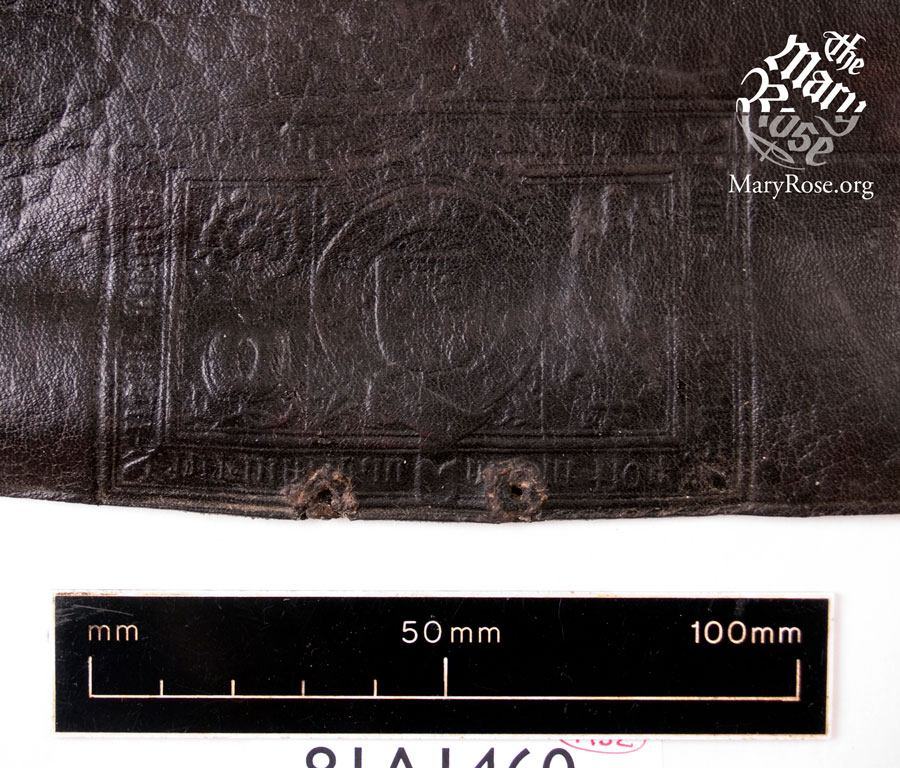