Scientists are using microbiology to examine some of the human remains from Henry VIII’s flagship Mary Rose to determine if any come from the same person.

Research by Dr Garry Scarlett, a DNA expert at the University of Portsmouth, should enable museum staff to recreate the skeletons of some of the crew.

Only a handful of the ship’s 500 crew survived when Henry VIII’s flagship was sunk in the Solent in 1545. Remains of just over a third of the crew have been found, with the rest lost to the sea. The men on board the ship included officers, soldiers, gunners and mariners. Many of those whose remains were recovered were found in groups, making it difficult to identify individuals by physical observation alone. So far, it has been possible to partially reconstruct 92 skeletons by a physical study of the bones. This study is an attempt to match bones belonging to individuals using molecular biology. Eventually, Dr Scarlett’s research might also be able to shed light on where some of the crew came from.

Dr Scarlett said: “It’s wonderful that science can help find new ways to engage people in the life of the ship, its fateful battle and in history. I hope, once we have determined for certain which bones belong with which, some whole skeletons might be able to be reassembled.”

Dr Scarlett’s earlier research determined the sex of the ship’s dog, whose skeleton was also found inside the ship’s hull during the underwater excavation in 1981. He was also able to identify which modern breed the dog was most closely like.

Dr Scarlett’s latest research is funded by charity The Pilgrim Trust. His team will work with maritime archaeologist Alex Hildred from the Mary Rose Museum. She said: “The ability to recreate individuals from bones from DNA analysis rather than having to rely on physical matching has huge benefits; unless key parts of the skeleton of an individual are present it is difficult to associate a skull with a body, or an upper body with a lower body.  Only about a third of our 92 partially reconstructed skeletons have skulls, yet we have 179 skulls.

“This technique should enable us to recreate the faces of many more of our crew. Enlarging the number of re-constructed skeletons means we can tell more about them – height, age, provenance, wounds they sustained, diseases they may have had.

“Our museum is dedicated to the men of the Mary Rose, and these techniques inform us about them.  Displayed alongside their possessions, the collection is seen within the lives of these men, within the context of the ship which was their home, workplace and sepulchre.”

The museum is in Portsmouth’s Historic Dockyard, a stone’s throw from where Mary Rose was built and about two miles from where she sank between Southsea Castle and the Isle of Wight defending England from a French invasion fleet larger than the Spanish Armada. She had completed just 34 years at sea and was nearing the end of her third war. The museum houses a spectacular cross section of the ship’s hull, submerged for nearly half a millennium in mud. In addition to the hull, the museum houses thousands of well-preserved artefacts, including weapons, jewellery, furniture and medical equipment.

The ship was rediscovered by divers in 1971 and excavated between 1979 and 1982 when the hull was raised. Further excavation between 2003 and 2005 revealed significant timbers from the bow of the ship, suggesting that the site still has many secrets to reveal.

More than nine million people have visited the museum to date. Following a refurbishment in July 2016, visitors can now enjoy stunning panoramic views of Henry VIII’s favourite warship, which sank on 19th July 1545 during the Battle of the Solent. Stunning film projections of the crew going about their everyday work in peacetime and wartime are projected on to the ship and over 19,000 artefacts excavated from the wreck site are on display in the museum, together presenting a captivating insight into Tudor life. 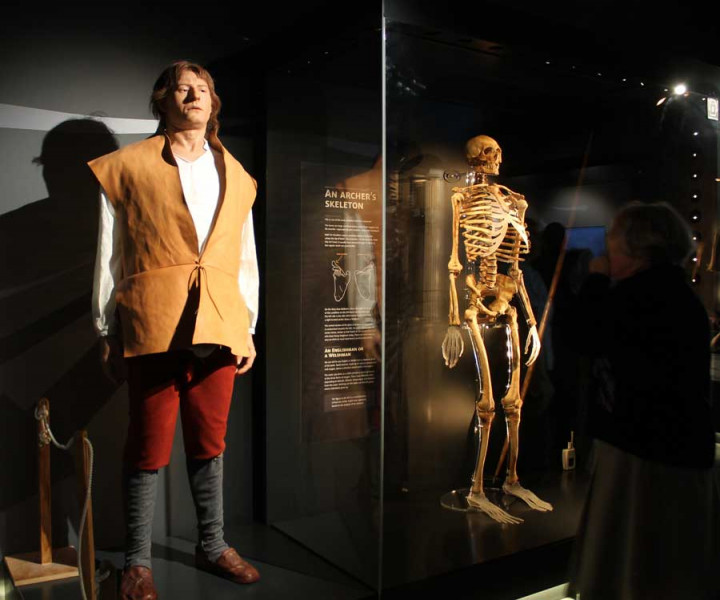