New stable isotope and ancient DNA analysis of the bones of stored cod provisions recovered from the wreck of the Tudor warship Mary Rose, which sank off the coast of southern England in 1545, has revealed that the fish in the ship’s stores had been caught in surprisingly distant waters: the northern North Sea and the fishing grounds of Iceland – despite England having well developed local fisheries by the 16th century.

Test results from one of the sample bones has led archaeologists to suspect that some of the stored cod came from as far away as Newfoundland in eastern Canada.

The research team say that the findings show how naval provisioning played an important role in the early expansion of the fish trade overseas, and how that expansion helped fuel the growth of the English navy. Commercial exploitation of fish and the growth of naval sea power were “mutually reinforcing aspects of globalisation” in Renaissance Europe, they say.

“The findings contribute to the idea that the demand for preserved fish was exceeding the supply that local English and Irish fisheries were able to provide in order to feed growing – and increasingly urban – populations. We know from these bones that one of the sources of demand was naval provisions,” said Dr James Barrett, from the McDonald Institute for Archaeological Research at the University of Cambridge.

“The existence and development of globalised fisheries was one of the things that made the growth of the navy possible. The navy was a key mechanism of maritime expansion, while at the same time being sustained by that expansion. The story of the cod trade is a microcosm of globalisation during this pivotal period that marked the beginning of an organised English navy, which would go on to become the Royal Navy,” he said.

The study, led by researchers from the universities of Cambridge, Hull and York, is published today in the open access journal Royal Society Open Science. 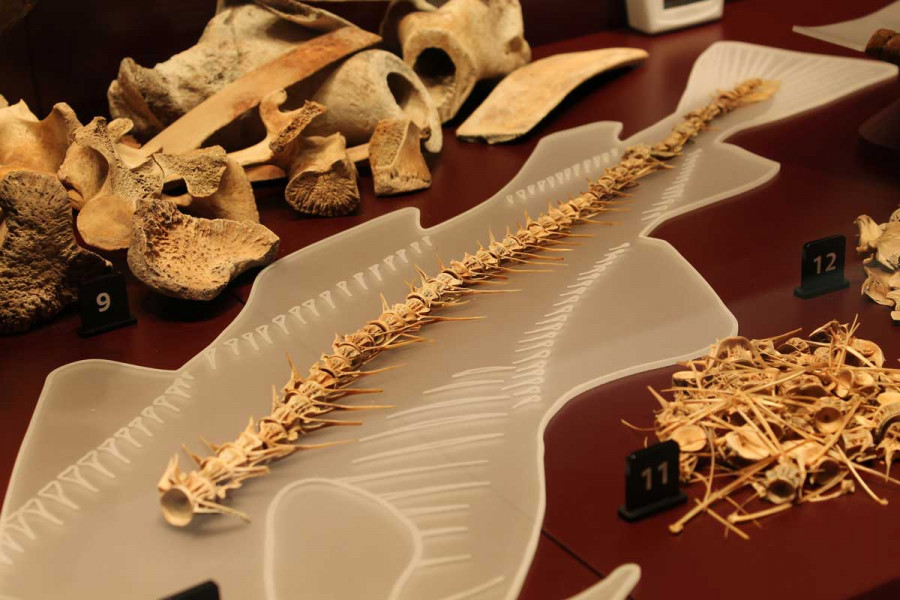 Built in 1510, the Mary Rose was one of the most famous ships in England, a former flagship of Henry VIII’s fleet, when it mysteriously heeled over and sank in the Solent channel during a battle with an invading French fleet in 1545, taking almost all of its crew – over 400 men – down with it, as well as a full store of provisions. Rediscovered in the 1970s and raised in 1982, the remains are an extraordinary time capsule of naval life during the Tudor period.

Among the remains of the ship’s supplies were thousands of bones from dried or salted cod from casks and baskets – staples of Tudor naval diet. The researchers took a small selection of eleven bones from the various different holds of the ship, and analysed them using two techniques: stable isotope analysis, which reflects the diet and environmental conditions of the fish based on the bone’s protein chemistry, and ancient DNA analysis, which reflects genetic drift, gene flow and natural selection.

Separately, the techniques gave very broad answers, but when cross-referenced with each other and the historical record they provided researchers with increasingly reliable evidence for which waters the cod had been fished from almost 500 years ago.

The best indication for three of the samples was that they were fished in the northern North Sea, possibly the Scottish Northern Isles, where there were known fisheries that produced dried cod preserved in salt.

Another seven of the samples probably came from waters off the cost of Iceland. Due to the cold and dry climate, many Icelanders preserved cod by air-drying it during winter months, a product known as ‘stockfish’, which was frequently traded with the English. English fishermen also worked Icelandic waters themselves, to produce salt cod. At the time, England to Iceland was a three to six month round trip, usually departing in spring and returning in early autumn after a season of trade and/or fishing.

One bone sample appeared to have come from the other side of the Atlantic. While not definitive, the most likely evidence pointed to Newfoundland, an island off the northeast Canadian coast famous for its historical cod fishery. While such distances for fishing may seem surprising for the time, James Barrett says that – as the English Newfoundland fishery had begun in 1502, in the wake of John Cabot’s exploratory voyage of 1497 – this is entirely plausible. French, Spanish and Portuguese fishermen also took advantage of this new source of cod.

“At the time of the Mary Rose in 1545, Newfoundland was a small-scale seasonal fishery where mariners went to fish and then come home. Within a century the Newfoundland fishery had become a major economic concern, of greater value than the fur trade, for example,” said Barrett.

“The need for fish stocks was an important driver of involvement in north-eastern North America. The fish trade was one of the key links in the causal chain of European expansion to that continent,” he said. A typical outbound journey time from England to Newfoundland was around five weeks.

Records from just after the time of the Mary Rose show that a standard daily ration of preserved cod was a quarter of a fish served with ship biscuit, two ounces of butter and a gallon of beer. This was dished up three times a week. The bone samples show that these fish could range from approximately 70cm to over a metre in length, so a quarter of cod was a significant portion. “Preserved cod was great value for money as a provision, particularly as space and durability were an issue on board a ship,” said Barrett.

Before the reign of Henry VIII, another driver for the cod fisheries was the fact that fish was a suitable food during Christian fasts such as Lent as an alternative to milk and cheese, and, as Barrett points out, “urban populations didn’t have room for cows in their back yards”.

Once Henry VIII split from the church and the Reformation was ushered in, religious associations with meals of fish started to dissipate, threatening to send England’s fisheries, and subsequently its navy, into decline.

Thus Elizabeth I, Henry’s successor, instigated weekly ‘fish days’ to encourage domestic consumption and consequently a commercial fleet to not only help feed the navy but also ensure a supply of mariners to help run it when needed.

“The importance of ‘victualling’ the navy continued to grow in the seventeenth century, most famously during the Restoration when its administration was systematized under Samuel Pepys,” said Barrett.

“Military sea power was a prerequisite for the concurrent – and subsequent – development of England’s sea-borne colonialism. Yet by sourcing the cod bones from the Mary Rose, we see that the navy itself was first sustained, in part, by fishermen working distant northern and transatlantic waters,” he said.

Arguably the most challenging aspect of the research was creating the historical context, the ‘base map’, for the researchers to compare their Mary Rose specimens to. Due to chemical pollution of the world’s oceans over the last few hundred years, and changes in the genetic structure of cod populations due to fishing pressures and climate change, the team had to find and use ancient cod bones for their study’s comparison controls, as modern cod bones would have been useless.

“Thankfully, when making dried cod, part of the process was chopping the head off,” said Barrett. “This meant we could use skull bones from archaeological sites to get both genetic and isotopic signatures for all these regions. The lion’s share of the work was finding and analysing the over 300 control samples.”

The research was funded by the Leverhulme Trust, with an accompanying grant from the Fishmongers’ Company, one of the twelve livery companies of the City of London.