At a gala dinner for the 2010 space-themed Portsmouth Festivities, the Mary Rose Trust presented the crew of the Atlantis Space Shuttle with a parrel ball recovered from the Mary Rose, with the hope that it would be taken into space. 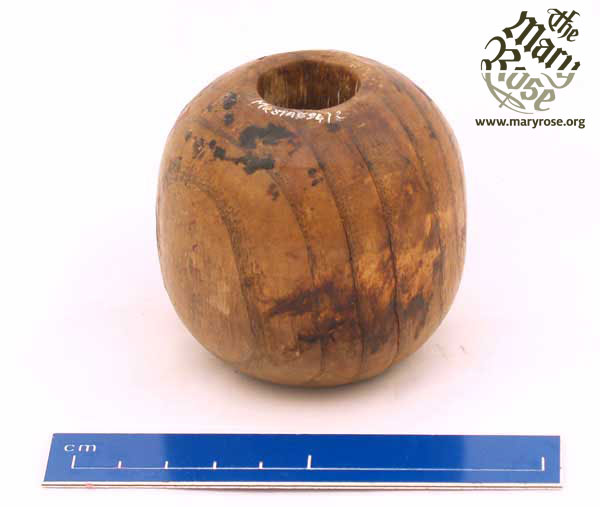 The 3” parrel ball, or truck, was part of what’s known as a parrel assemblage, which was used to move the yard arms up and down the masts.

Scheduled to take off on 29th April, 2011, the launch was delayed until 16th May, when the space shuttle Endeavour took off from the Kennedy Space Centre to deliver equipment to the International Space Station. This was her final voyage, and the penultimate flight of NASA’s Space Shuttle program, which ended later that year after 135 launches over 30 years. After 17 days in orbit the parrel ball returned to Earth.

Because the parrel ball had to undergo a long period of decontamination, it wasn’t available for our topping out ceremony on 17th June 2011, so  a stand-in was presented to the Mary Rose Trust by astronauts Dr Andrew Thomas and Dr Shannon Walker, at a rain-swept ceremony on the museum building site. The parrel eventually returned to the Mary Rose a few months later.

The Mary Rose has had links with space before: Michael Foale worked as a volunteer diver on the ship’s excavation in 1981, but would later go on to fly the space shuttle, as well as work on the Russian space station Mir and to the International Space Station!

The parrel ball continues a tradition of taking items into space that began with NASA’s first astronauts. During the 50 years of astronauts launching into space, commemorative objects have flown to the moon’s surface and made repeated orbits of Earth, returning later to inspire those who could not make the trip themselves and remind astronauts of their accomplishments.

It was also done as part of our fundraising at the time; the current museum was, as you saw above, still just a framework, and we were still raising the money needed to complete the works. Luckily, after this donations ‘rocketed’! [The Mary Rose Trust apologises for this pun.]