Branding is everything. Everybody recognises the Nike swoosh, the Apple logo, or the McDonalds Arches, because they’re everywhere. In England during the time of the Mary Rose, the most prominent image was the Tudor Rose, symbol of the Royal Family, and of the king, Henry VIII.

While the Tudor Rose appears to have been limited on the ship’s structure to the emblem, displayed proudly on the bow, it does appear on quite a few of the items found on board the Mary Rose, and even then on a few personal items!

It seems odd that the symbol of the royal family would appear on normal people’s belongings, but is it any stranger than the Flag of St George or the Royal Arms of England appearing on everything from cufflinks to underpants? A bit of national pride can go a long way, and to them, the Royal Family, and the Tudor Rose, represented England herself (and a look at the ‘Visit England’ website would suggest that it still does!).

(Also, no, we’re not doing a follow up called “The Marys of the Mary Rose”, we’ve not identified any - yet!) 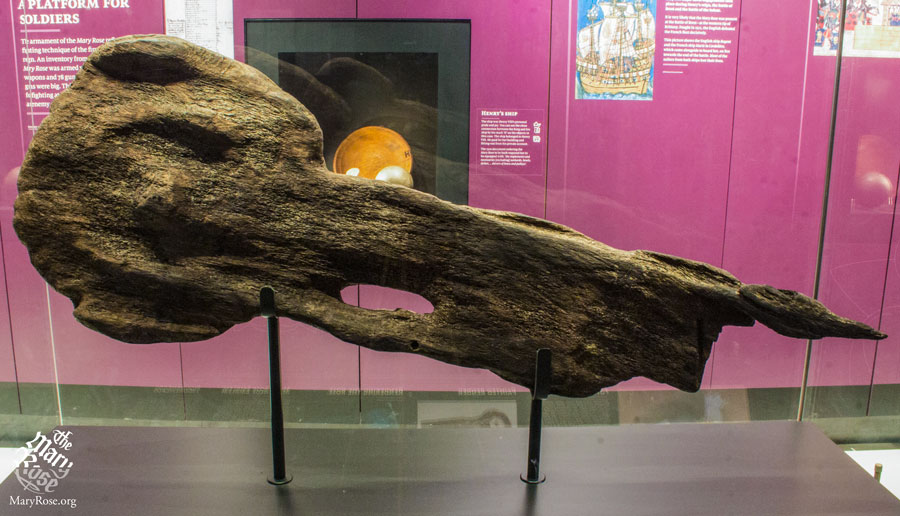 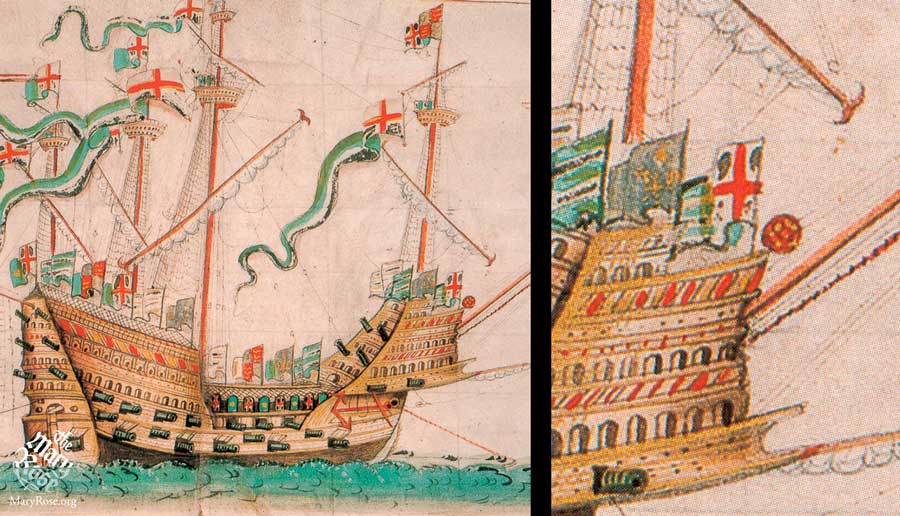 As the 2005 excavation season on the wreck site drew to a close, an eroded timber was found in the bow area of the site.  As it was cleaned, the image of a rose appeared – was this the emblem that can be seen above the bowsprit in the only surviving contemporary illustration we have of the Mary Rose afloat?

The object is made from a single piece of oak, formed into a stalk topped with a disk.  Although eroded, it is clear that both sides of the disk were carved. The emblem was mounted so that the rose carving could be seen from either side of the ship.

When wooden ships were replaced by iron, carved wooden figureheads gave way to the badges we still use today – HMS Queen Elizabeth even has the Tudor Rose, showing a link between the latest Royal Navy vessel to call Portsmouth its home, and one of the first. 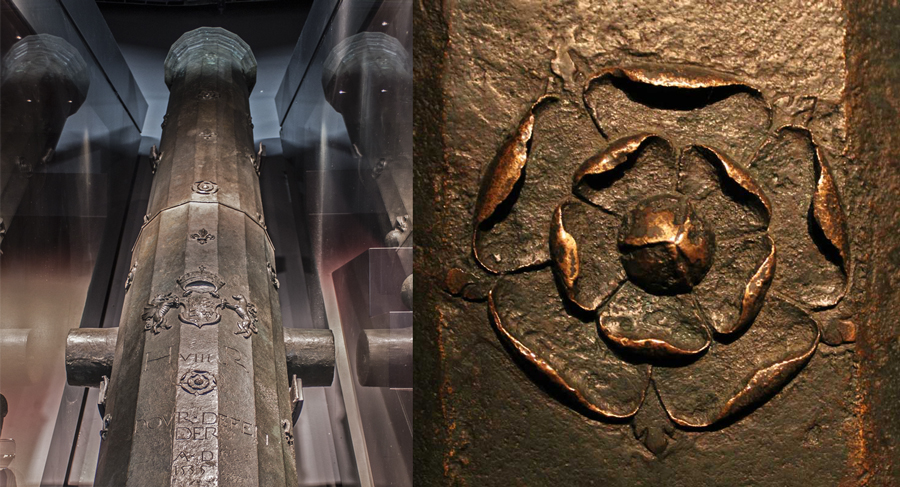 When you go on ships like our neighbours HMS Victory or HMS Warrior, you notice that their guns are all fairly uniform, and dare we say a bit dull. When you look at the Mary Rose’s, though, they’re all different sizes, and have a lot more decoration on them. This was partly because they were made by different gun manufacturers, using one-off moulds.

One of the few things they do have in common, with the bronze guns at least, is the presence of the Tudor Rose, surrounded by a garter and topped with a crown. You could say Henry VIII was the original “Guns N’ Roses” fan!

Then you have this one, made in 1535 by Italian gun manufacturer Francesco Arcano, which doesn’t have a gartered rose, but IS covered with a pattern of alternating roses and fleur de lis. Truly the Louis Vuitton bag of the Tudor weaponry world! 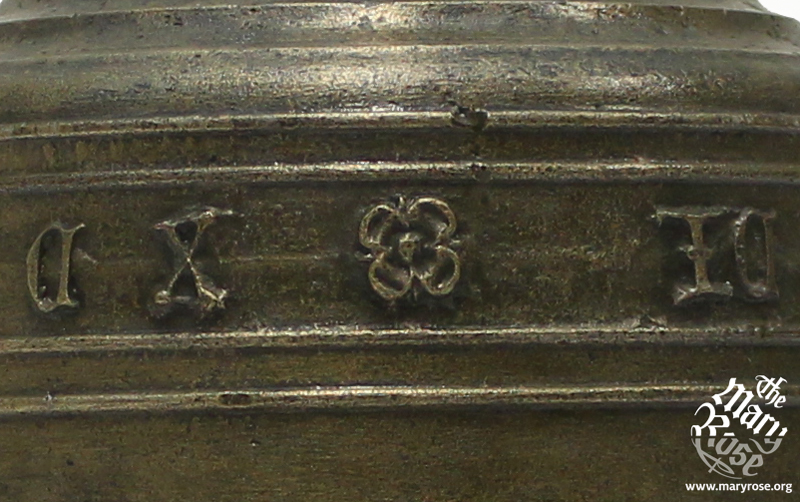 The bell of the Mary Rose was cast in bronze in or around Antwerp, and features the Flemish inscription ‘Ic ben ghegoten int yaer MCCCCCX’, which translates as ‘I was made in the year 1510’, the year that the Mary Rose was commissioned. This is punctuated by a small Tudor Rose; a clever bit of foresight, considering the ship may not have be given the name until after the bell was cast in 1510.

Oddly, though, the rose only has four petals, suggesting that either it was easier to cast it this way, or that the maker wasn’t familiar with the Tudor Rose. Obviously their style guidelines weren’t as strict as they are today! 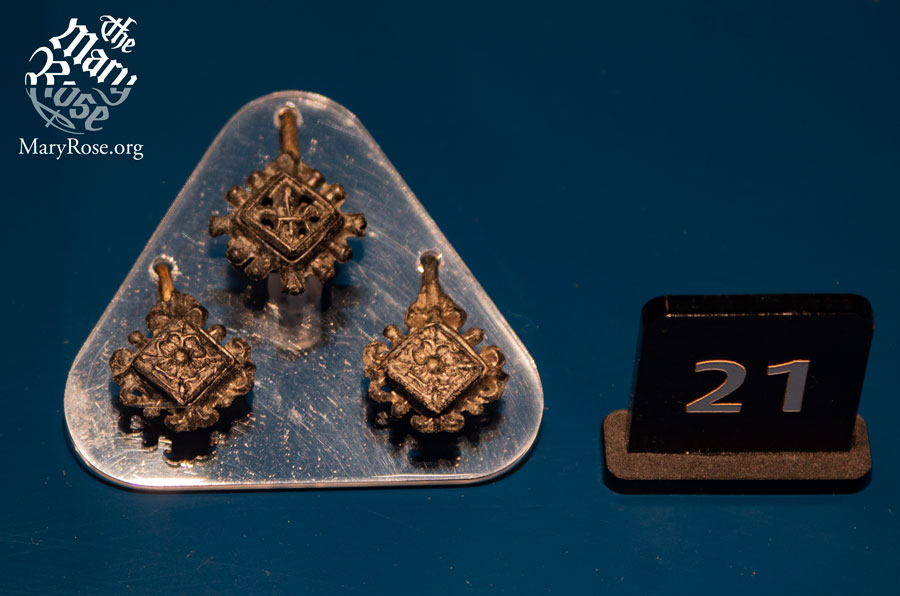 Despite the insistence of the lady who misidentified some damaged stitching in our museum a few years back, the zip had yet to be invented, and George de Mestral had yet to be born, let alone invent Velcro, so most clothing was done up with laces, pins, buttons or clasps.

We found three pewter clasps in a cylindrical box on the orlop, or storage deck of the Mary Rose, two of which featured the Tudor Rose, the other featuring the Fleur de Lis. It’s been suggested that these were actually used mainly by women, so perhaps they were a gift for a loved one back home?

(Another one with only four petals - someone needs a word with their branding officer!) 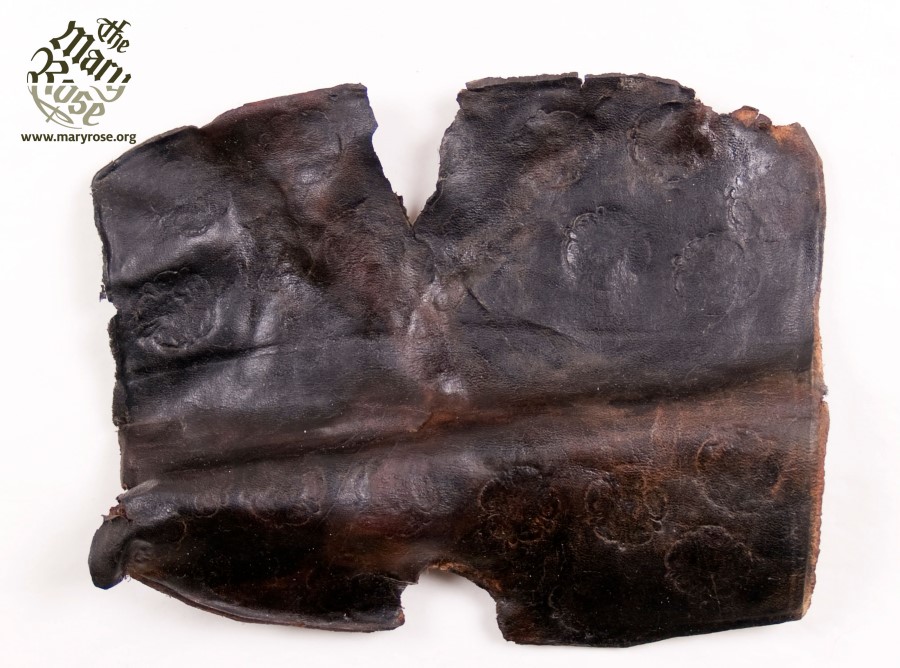 Although the handgun had been in use in England for over 200 years, the Mary Rose only carried 50 of them, compared to the 250 Longbows recorded as being on-board. While the gun was easier to use, and required less strength to pull the trigger than to pull a bowstring, it took longer to reload, so the longbow was still the soldier’s weapon of choice.

Because of this, we found a lot of wrist guards, or bracers on the Mary Rose. As the name would suggest, their job was to protect the wrist from the bowstring, which would be travelling at nearly 115 MPH with a force of 150lb, as well as to keep sleeves out of the way, preventing tangling with the arrow.

While some of the bracers feature religious symbolism, and some even have the insignia of various Worshipful Companies (early corporate sponsorship?), three were found with the Tudor Rose on them, including this one. 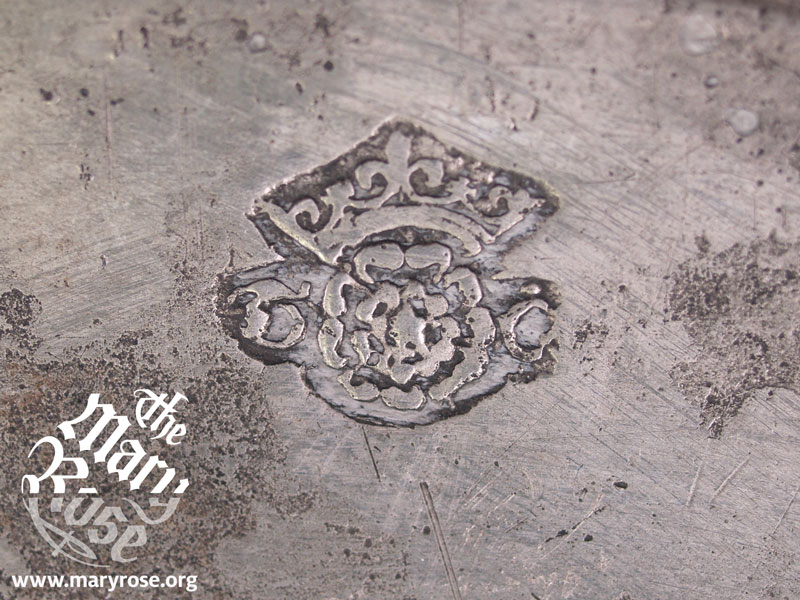 Pewter was a popular material to make plates, bowls and cups from in Tudor England, especially if you were rich. We found a fair amount of it, mostly belonging to the officers of the Mary Rose, and even a few belonging to the Admiral of the ship himself, Sir George Carew.

Some of the pewter plates recovered from the Mary Rose feature the Tudor Rose – Does this mean they belonged to the King? It’s unlikely; the crowned rose is actually a maker’s mark, the ‘TC’ flanking it probably refers to Thomas Chamberlayn, the Master of the Pewterers Company in 1532. Most tin, a major constituent of pewter, exported from England was stamped with the crowned rose, to show it was highly refined, so this was probably an attempt by the maker to show the quality of his pewter.