Myths and legends are a popular part of our society, and we cling to them even when all the evidence says they’re wrong. Yet still, people believe things like Vikings wearing helmets with horns on them, Bob Holness playing Saxophone on ‘Baker Street’, and the Mary Rose sinking on her maiden voyage.

Obviously, we’re going to talk about that last one, as although Vikings are interesting, and Baker Street is an excellent song, the maiden voyage myth is the one that I, as well as the many other members of our museum team, hear every day, and it drives us up the wall.

So, just to clarify;

The Mary Rose did NOT sink on her maiden voyage.

We cover the story of the Mary Rose in more detail elsewhere on this site, but for those of you who don’t click links, she was launched from Portsmouth sometime in the summer of 1511. She then travelled along the south coast, around Kent to London where she was fitted out with weapons, as well as all the other accoutrements of war that she needed. She then set off on her ‘proper’ maiden voyage in April 1512, under the command of Admiral Edward Howard. Then after over 30 years, in which she'd fought in a number of wars, been under the command of three admirals, and even undergone a major refit, she sank on 19th July 1545.

"Ah!", some of the more annoying of you might be about to say "Maybe it was her maiden voyage after her refit?" The refit was in 1536, nine years prior to the sinking, and took place on the Thames. Even if you consider the Battle of the Solent to be part of the same 'voyage' that brought the Mary Rose around the coast from London to Portsmouth, it seems unlikely that that was her first outing in nine years. Plus we covered this in a meme a while back. 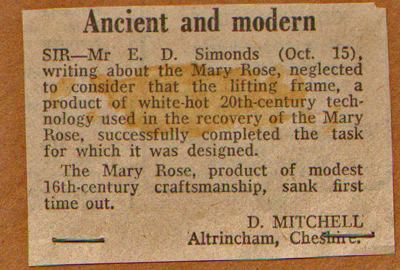 But where does this myth come from? This subject seems to have developed enough myths of its own, Blue Peter (most probably undeservingly) receiving most of the blame as the source of most people's memories of the sinking, mainly because that was where most people heard about the Mary Rose in the first place rather than for any legitimate reason.

Even so, it is very likely that TV is the source of this myth; looking though the print coverage from the time, there is no mention of the Mary Rose sinking on her maiden voyage. Indeed, the only mention we could find was a letter to the Daily Express, dated 19th October 1982, where Mr D. Mitchell (presumably not the comedian, who would have been 8 years old at the time) claims she "sank first time out". (Thankfully, he is corrected on the letters page just days later!)

We can only assume that this myth comes from an error in research back when the Mary Rose entered the public consciensness. iun the late 70s/early 80s. The press release issued by the Mary Rose Trust does make reference to the raising of the Vasa, a Swedish warship that had, until then, been the world's most famous major archaeological salvage project (and is still one of the most important, we've learnt a lot about conservation techniques from their team). The Vasa had sunk less than an hour into her maiden voyage, due to errors in her design, details that were included in the press release. It only takes one stressed researcher, skimming through the release for interesting snippets, to pick that out of context, and put it into a script. Before you know it, the whole world has been told that the Mary Rose, the pride of Henry VIII's fleet with a 34 year service history, was a poorly designed failure, unable to get out of the harbour, let alone fight in any battles. While it does make a much more exciting and interesting story, which is why it's managed to survive over 30 years, it is complete nonsense.

But we're slowly getting the truth out there.