21st March, 1513. Admiral Sir Edward Howard has recently claimed the Mary Rose as his flagship, and he and his fleet are just off the north-east coast of Kent. He sends out an unusual command, the ships were to head east, then make a sharp turn beyond north Foreland, then head south, on the western side of the Goodwin sands. For the first time in English naval history, the Admiral ordered a race.

It wasn’t that fair a race, all things being told. They didn’t line up at the start, indeed some ships were as much as four miles ahead of the Mary Rose when the race began. This advantage does not appear to have been helpful, as the Mary Rose managed to finish ahead of all the others, the Sovereign, one of Henry VII’s old warships finishing second with the Nicholas coming third. There’s no mention of the Mary Rose’s sister ship, the Peter Pomegranate, which may have been assigned to a different fleet. The last across the line was the Maria de Loretta, which, along with the Christ and the Katherine, received very poor reviews from Admiral Howard, who wrote to Henry VIII himself, saying that “I trust we may remedy her well enough that she shall follow with the best.” Interestingly, the Christ is claimed to be overladen with ordnance, a claim often attributed to the Mary Rose when she sank. That the Christ managed not to sink during a difficult manoeuvre in open waters suggests this may not have been the only reason for her loss.

Howard, in the same letter, has nothing but praise for the Mary Rose, referring to her as “the noblest ship of sail” and “The flower […] of all ships that ever sailed”. His constant praise for the Mary Rose may be due to his pride in his new command, but also partly due to Henry’s influence on the building of the ship. While all the other vessels in the fleet were the king’s ships, the Mary Rose was purpose built for the king, who may have had a hand in her design. Having recently been given the title of Lord Admiral by the king, perhaps Howard wanted to show his gratitude by complimenting the king’s ship-building abilities.

Sadly, once you start thinking that way, you have to wonder if the race was entirely fair. This was the first time an English military fleet had taken part in a race, so is it possible that the other captains, not wishing to offend their new commander, let him win? 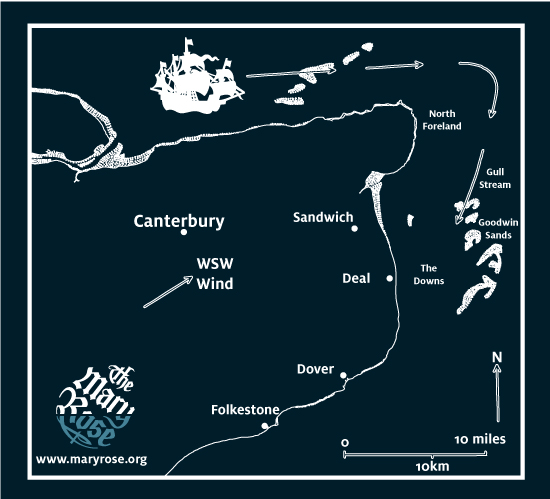 Then again, the Mary Rose was a new ship, pride of the fleet, and so may have had an exceptionally well trained crew, capable of handling the vessel in such a way that she was able to outmanoeuvre the rest of the fleet. Howard even refers to the techniques the crew used during the race in his letter raising and lowering bonnets and adjusting the sails to catch side winds, and they appear to have been sufficient to allow the Mary Rose to perform well. If the rest of the fleet let the Mary Rose win, they didn’t make it easy.