Whilst she was laid up there would be a skeleton crew on board consisting of a Master and a Purser, plus up to 21 mariners or ship keepers. The guns, rigging, sails, masts and navigation equipment were removed, and although they would be in port and able to return to land using a boat, someone would have had to keep an eye on things. It’s likely that at least some of these poor chaps would have spent their Christmas onboard, but how would they have celebrated Christmas?

We know that music was important on board the Mary Rose as we found several musical instruments including drums and tabor pipes. The crew would have been familiar with many of the Christmas Carols that we all enjoy today such as ‘While Shepherds Watched’ and ‘We wish you a Merry Christmas’, so no doubt there would have been some singing! 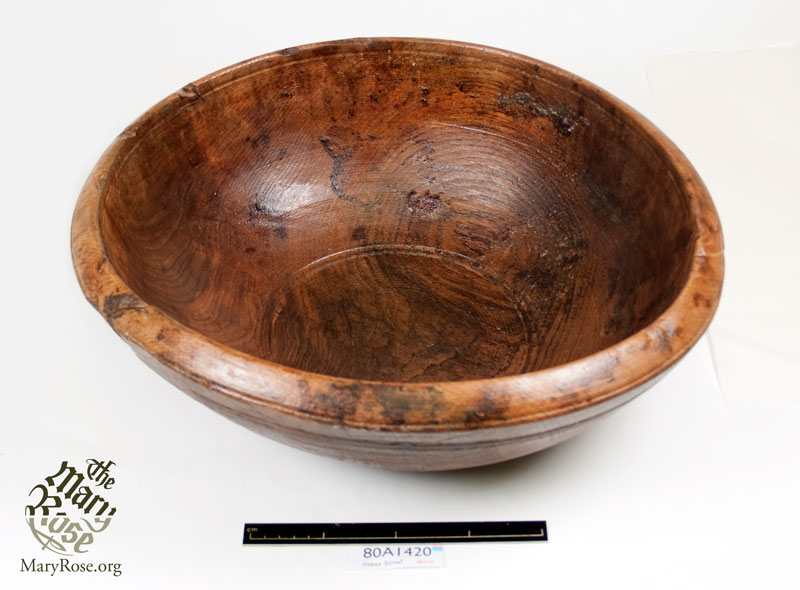 Wassailing carols were also popular and each area of the country had its own version, so perhaps the crew of the Mary Rose had a version too! Wassailing which involves drinking from a communal bowl was popular amongst all sections of society and was a normal practice during the rest of the year, it wasn’t just for Christmas. Bowls holding up to a gallon of alcoholic punch including ale, cider, sugar and spices were used and we have several examples of drinking bowls in our collection. There is even a bowl with a whopping 465mm/18inches diameter, plenty big enough for all that Wassail!

The Tudors held sumptuous feasts and kept all their best food for this time of year and hopefully the crew would have had some special treats. All sorts of meat would be eaten including venison, boar, peacock, pickled pigs ears and the famous Tudor Christmas pie, a 5 bird roast one inside the other. For those with a sweet tooth they could finish off just like today with Christmas pudding and mince pies, which in the 16th Century still contained mincemeat! But not Yule Log as this would have actually been a wooden log not a chocolate one! Perhaps the crew would have decorated one of the galley logs on Christmas Eve and burnt it on Twelfth Night as was the practice at home. 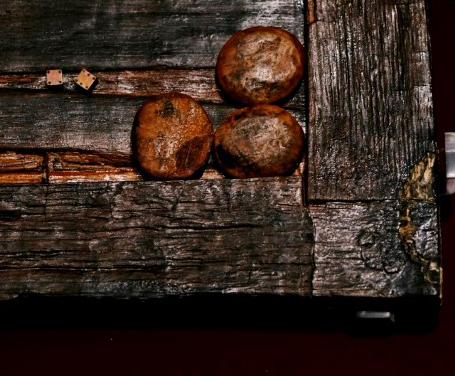 After dinner they obviously didn’t watch the Queen’s speech, due to the lack of a queen, or television!), but we know that the sailors on board were partial to board games including several dice and a backgammon set! All sport and games were banned over Christmas except gambling and archery, two things I’m sure the crew would have enjoyed during the festive period. And did they have a Lord of Misrule supervising their revelries? We do hope so!

Unlike the foyer of our museum there would have been no Christmas tree (although the Germans had started this tradition by this time, the practise wouldn’t come to England for another few hundred years!) and baubles on board the Mary Rose  but they may have used natural evergreens such as ivy, mistletoe and holly to decorate the ship but not until Christmas Eve. If they had gifts for one another these would be given at New Year and not on Christmas Day