"I worked on the Mary Rose project from August until October 1982, and was very fortunate to be present (between support vessel Sleipner and crane Tog Mor) on the 11th October when she came to the surface.  Along with other work, I completed 31 dives, totalling 52 hours and 48 minutes." 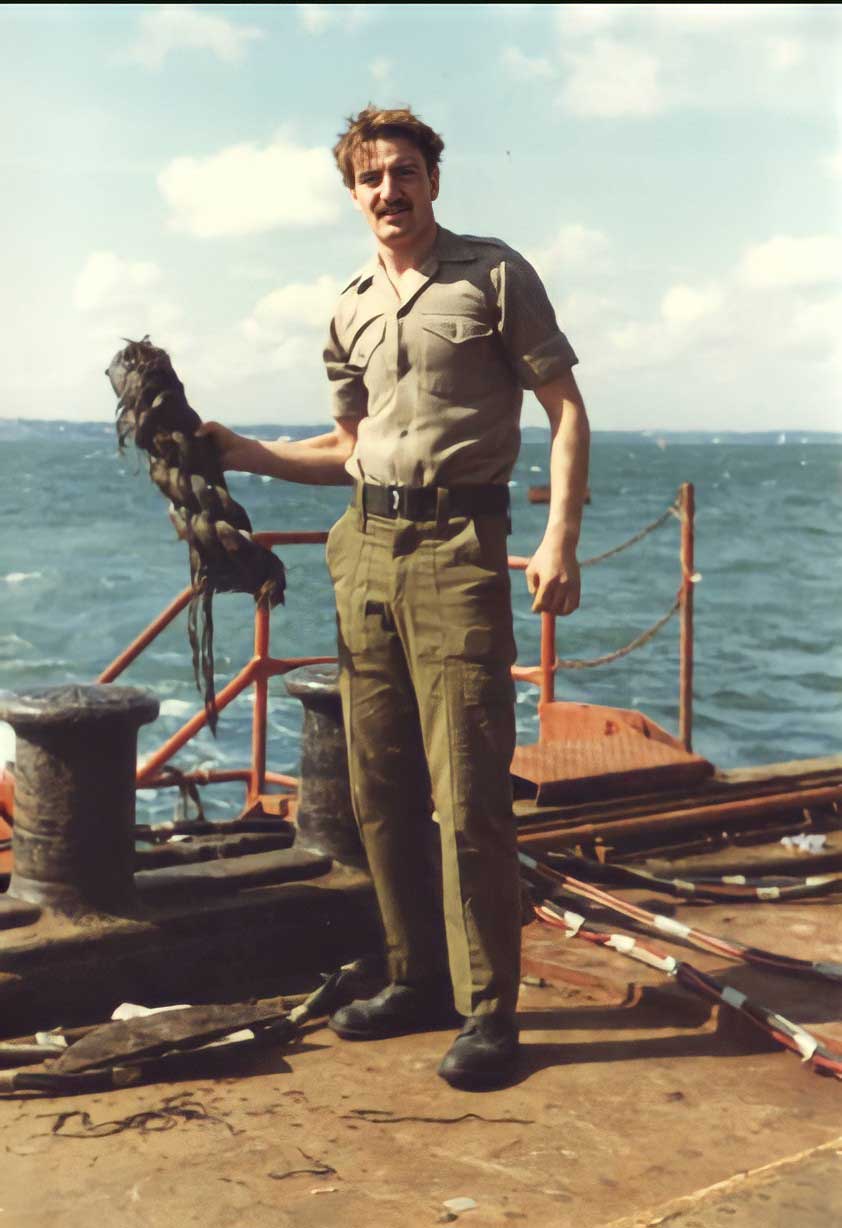 Writing this blog has prompted me to look through my diving log book and reminisce.  As a Royal Engineers Diver my log book is the ‘blue book’, or AB 576. The Royal Engineers were mainly tasked with the recovering the hull to the surface after the Archaeologists had retrieved the artefacts which were then preserved and are displayed in the museum today.

Looking at my log, I was involved in many different tasks, but 2 main areas which stand out are tunnelling (digging ‘scour pits’) and cropping bolts. The tunnelling underneath was partly to free the vessel from the mud, but mainly so the cables bolts and bolts used to lift the ship could be secured from underneath.

The tunnelling involved 2 tasks – water jetting and airlifting. Water jetting was essentially like using a large fire hose to ‘blast’ into the Solent mud which had been holding the Mary Rose for over 400 years.  Working behind the person jetting would be another diver with an airlift.  This worked like a big underwater vacuum cleaner, and drew the newly-jetted mud away and up the pipe (airlift) where it came out the top and the current carried it away (or sometimes deposited it back on the divers if the tide was slack!).

Cropping bolts – divers drilled holes through the vessel to prepare for lifting.  Underneath the hull the bolts wend through metal plates and were secured with large nuts.  The excess bolt sticking through had to be cut off so it didn’t damage air bags (like big inflated pillows). I spent a number or hours looking for, and cutting off (cropping) these bolts with a large hydraulic tool.

During my time there, I worked with a fantastic bunch of people, both from the Mary Rose Trust and from the military (Royal Engineers), and was so proud to be involved in something with such national importance.   My dad kept a newspaper which had the front page title ‘she’s up’ with a photo. I could actually be seen on the hull (doing something mundane – lifting a small pump off). My dad was immensely proud and had a printed photograph of the image framed.

Lots of people have asked if it looked nice under the water and If I saw any interesting stuff (artefacts)...most of the time I couldn’t see 6 inches from face - it was too muddy!

Another highlight was when we arrived on Sleipner and were told to stand in a line….then HRH Prince Charles was brought over and introduced to us. Completely took us by surprise, and we were dressed in a mixture of uniform and civilian clothing - not the usual military standard HRH is introduced to!

#WhereWereYouin82?
Share your memories with us of the Raising of the Mary Rose!

Whether it's memories of watching it on TV, from the seafront in Portsmouth or even being part of the operation, we want to hear from you!

Send us your memories