I have been a diver for many years and have dived on many various shipwrecks. Some in other sea areas of other countries, including some initial Archaeology experience on HMS Coronation at Penlee Point under the authorisation of Cmdr. Bax, of Fort Bovisand, Plymouth. The most interesting experience of them all was working on recovery from the seabed of one of the oldest of Royal shipwrecks. The Mary Rose.  Probing, searching and clearing of the seabed in anticipation of finding some historic artefact relic, from the past. 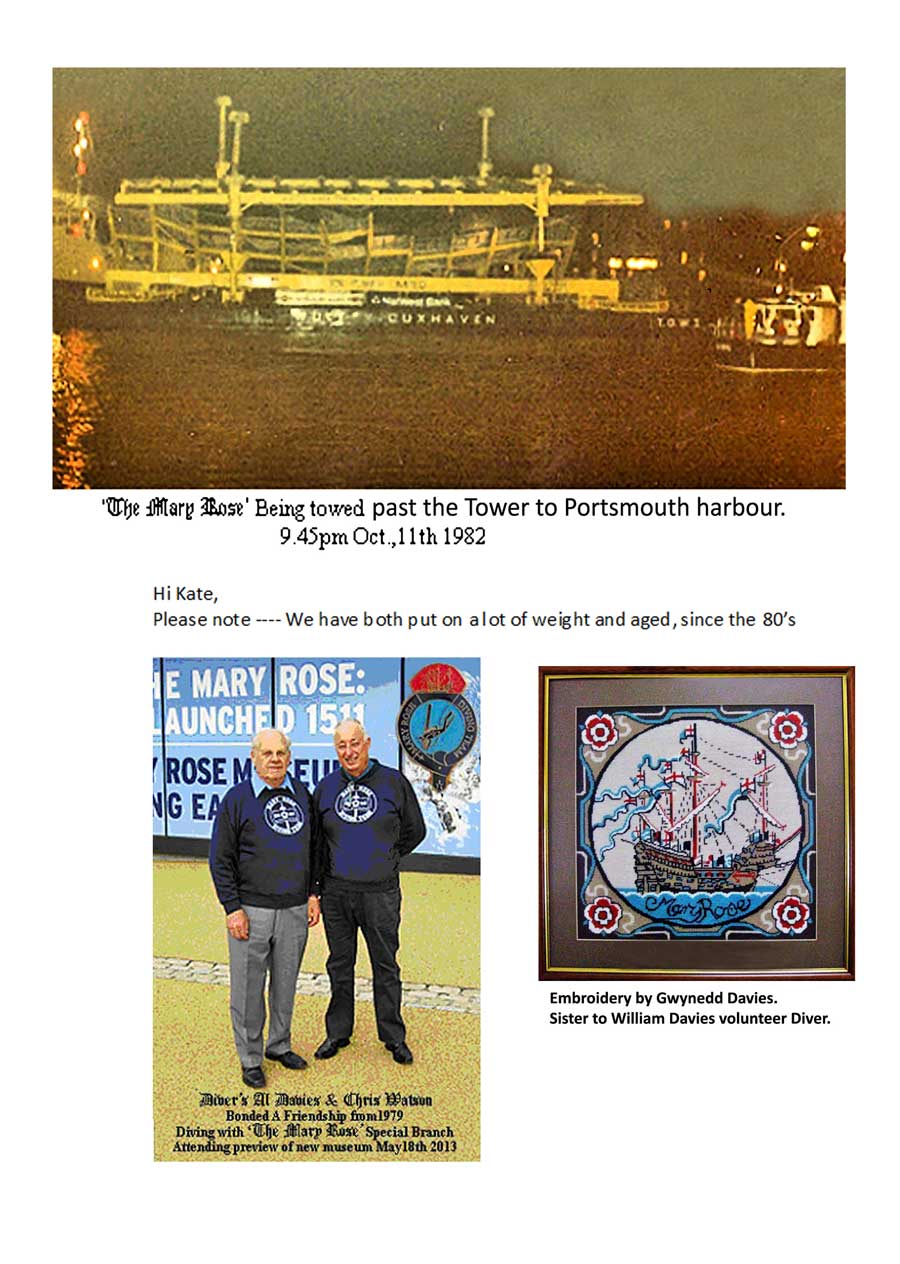 Whilst, on the stationed recovery ship, Sliepner, I met interesting fellow volunteer divers from all walks of life, and some from other countries. All with the same interest in recovering the Royal shipwreck Mary Rose. We also had some fun times on evening socialising. There was also one time on the Sliepner. Six of us divers still in wetsuits, clamouring, and manoeuvring around with laughter all trying to get into a bath of warm water, after a cold dive session. After the well publicised announcements of the Mary Rose recovery. Some local friends in my home town, who knew of my exploits and the local press heard about my participation contacted me for local publication of my Mary Rose experience including my families home town publication “Merthyr Express” in South Wales. Also a couple of local dive clubs & a Social Club contacted me, and asked me if I would give a talk about my Mary Rose experience, of which I obliged along with some drawings I had made. There were quite a few comments made by Club Diver’s stating and wishing they had volunteered to have gained the same experience.

Sunday, Oct. 11th 1982.  The time and day, of the raising of the Mary Rose from its watery grave for 437 years. The ship, being brought to the surface with tumultuous cheering, from the numerous surrounding boats of spectators awaiting its appearance. Suddenly, a lull in the cheering fell silent, when an almighty crashing sound of metal, with one of the supporting metal cradle legs crashed downwards and stopped almost immediately. Recovery Divers went into the water to inspect of any damage and to make safe if necessary.

Late afternoon, Chris Watson & I along with other volunteer divers that were viewing from our transport boat, were told that the hulk won’t be towed to Portsmouth Harbour till the following day  as the support leg had to be totally secured. So, we were taken back to shore. During the evening Chris & I made our way back to Southsea and whilst meandering along the sea front, at approximately 9.00 pm. We heard on a radio, that the ship was on its way to Portsmouth. So we hurriedly drove to Portsmouth, and stood waiting down by the Round Tower. Soon, after we had arrived there, people started gathering behind us, as they had also heard the report of its journey to the harbour.. A very large crowd had soon gathered, as we waited patiently for its arrival. The photograph taken of the ‘Mary Rose’ passing the Round Tower, towards the harbour, is not the best of photographs, as it was taken with a standard camera with no special lenses. The ‘Mary Rose’ hulk was being towed mid channel, quite some distance away, and in darkness, except for the lights from the towing tugs. I don’t know if other photographs were ever taken of the night time journey.

Amongst, the excited crowd of cheering, on seeing the ‘Mary Rose’ passing, and travelling towards Portsmouth Harbour. There was a comment made by a female voice standing somewhere just behind us, stating, “There are no sails, on the ship”  I don’t know what she was expecting, probably a full rigged warship, in full sail with all mast’s flags still flying! Chris & I, looked at each other with disbelief, smirked smiles, and a slight shake of the head without having to state any comments!

#WhereWereYouin82?
Share your memories with us of the Raising of the Mary Rose!

Whether it's memories of watching it on TV, from the seafront in Portsmouth or even being part of the operation, we want to hear from you!

Send us your memories